With Patreon & an Online Variety Show, Goner Records Adapts to the Pandemic 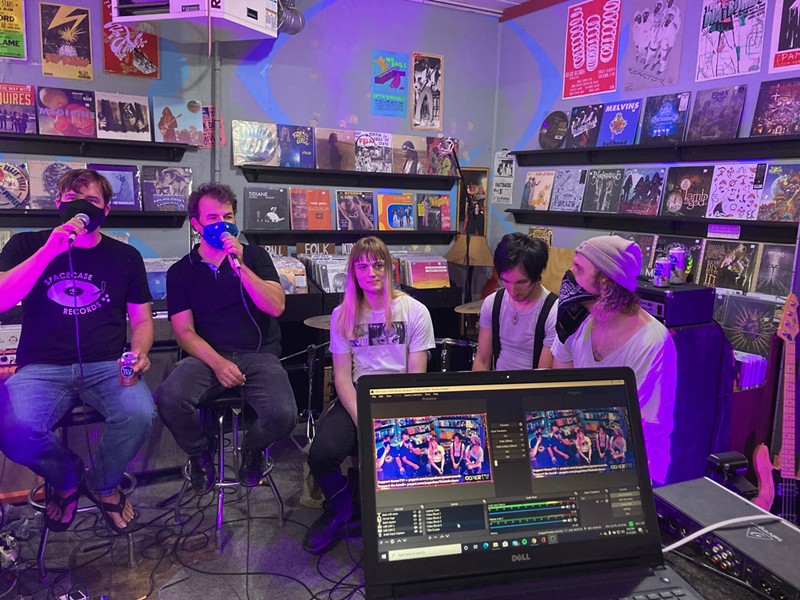 Record stores have been hit hard by the age of quarantine, and in the case of Goner Records, which is also a label and festival promoter, the effect has been tripled. And yet their many innovations, from a "telethon" for Record Store Day, to Goner TV (which debuted in July), to this year's virtual Gonerfest, reveal their willingness to innovate in order to accommodate the new normal.

Now they've embraced another approach to both surviving and staying connected with fans and customers, one that is more typically associated with artists: Patreon. I spoke with co-owner Zac Ives to learn more about the reasons behind their latest move, and what kinds of offerings patrons can expect.

Memphis Flyer: Is the move to Patreon more for the store or the label?

Zac Ives: It is primarily built to help fund this extra content that we're doing, like Goner TV and anything else we're gonna build outside of this. It's been cool to do all this stuff, but it's taking up resources and time. We're asking artists to do stuff, and it becomes a difficult issue to pay people for the work they're doing, pay artists for performing. Without a way to fund that, it was proving to be a constant issue.

We worked with other things, like donation links and everything, but I don't like that either. I don't feel like people need to be bombarded with PayPal links all the time. You're already taking this level of community out of the experience by not having people right in front of it, getting a live performance. So the positive thing about this is, it really allows people to have a more direct impact on things that they care about. And so that's what this turned into. If you like what we're doing, there's a way for you to directly impact our ability to keep doing these things. And at the same time, it lets us be creative with what we can give back to people for their help, for being a patron.

We're in the midst of creating this Goner archive of videos and performances and all kinds of different stuff that people can access with Patreon. And we're also gonna give away cool caps we're making just for patrons, as well as stickers and other little things along the way. We really didn't want to make it feel like an exclusive thing. Goner TV is always gonna be free. And we want people to feel like they're part of what we're doing, whether they're able to pay for this thing or not. That's super important. But for people that do have funds to donate, we want to give them a lot of different options for being part of this on a different level. So far the response has been really good. People who have hopped on board are excited.

There's gonna be a few different options for what people can get. The Goner Archive will only be accessible to patrons. And we may put up shows and playlists and podcasts and other stuff that will only be available to them. One nice thing is, it gives us the ability to grow. To talk to people about what they want to see, and make sure that they're getting something back for their role. But a big part of this is that you can be a part of this thing that you feel is important. If this is something you want to see, this is a way to make it happen. That's the part that's fun for us.

Goner has always been so communal, and that's what's been difficult about the last year: Not being able to have Gonerfest and not being able to get bands on tour. Either on the performing side or the audience side, not being able to get out and have the social aspect of live music is difficult. So we're trying to plug that void, in the short term. But long term, there are ways we can grow this and develop a niche that offers community but is also global.

Yeah, for sure. Goner TV is a nice catch all. This year's Gonerfest wasn't necessarily Goner TV, but it was online content. It was a way to make a festival virtual. People could be together and interact, whether it was through the chat or break-off Zoom things. They all incorporated artists and author interviews, and there were films. All those things brought out a side of it that we'd like to explore more, including with Goner TV. There are all these opportunities to grow this thing in an interesting way. And the Patreon page is a way to make all those things happen, and for people to be a part of it.

The community aspect of it goes back to the long-cherished Goner chat board that was retired earlier this year.

Whether it was retired this year or ten years ago, nobody looked at that board anymore, but it used to be a central part of how people found out about music and food and someone to fix your lawnmower and weird 70s Italian horror movies. It was how you learned about all sorts of things before Facebook took over. And it was much more alive. It was a powerful and interesting thing, at a time when big corporations were starting message boards and trying to get people to talk about things on them, which I saw when I worked at an ad agency. 'Oh, we just need people to get on our board and talk about our pantyhose!' And you go, 'Nobody wants to go on there and talk about your product!'

The reason the Goner chat board worked was, it was all like-minded people who were into talking about whatever. They were all sort of weirdos and loners and into strange things. And they found someplace where they could all interact. And it was a special thing, but I don't know how those things really exist anymore. I think they're just gone, and we're trying to figure out how to replace that communal aspect of it. Facebook did a pretty good job of it for a while, and now it's more corporate than anything. Trying to avoid ads and political speak and just have a natural interaction with someone is very hard to do these days. So Goner TV is a fun way to approach that communal aspect in a different way. A different take, a different time.

I like how it all kind of blurs together.

All my favorite things do that! We've always been that way. We've always been spread a little thin, maybe not putting enough focus on the shop or on the label because we're trying to do all these different things. We threw in a festival as well. We just have a giant to-do list every day, juggling all these different projects. Maybe because we have short attention spans. The natural outgrowth is to blend a lot of different things, even to our own detriment.

Just out of sheer enthusiasm.

It is! And we feel lucky we get to do something we love as our everyday work.

Speaking of Goner TV, there will be a new episode on Friday the 13th?

Yes, we have a new episode! Aquarian Blood's playing live. We've got a new movie segment that is really fun. Eric did an interview with Adele Bertei,  who wrote a memoir about being around Peter Laughner. And some other fun stuff. Then we have a couple more episodes coming. Bloodshot Bill is going to be on Dec. 4, and then one with Robby Grant and Greg Cartwright, a holiday episode on Dec. 18.