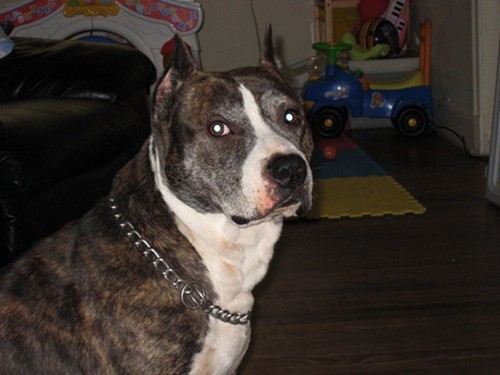 On June 24th, Memphis Animal Services officer Demetria Hogan picked up two pit bulls that had escaped Brooke Shoup's backyard while she was at work. Shoup arrived at the shelter first thing the next morning to retrieve her dogs, but only her three-year-old dog Jersey was there.

Although Memphis Animal Services records show the missing dog, 11-year-old Kapone, was picked up, they have no record of Kapone being housed at the shelter. Originally, the Shoup family feared Kapone had been euthanized, but Public Services director Janet Hooks said records show he was never even processed into the facility.

Last week, the Shoup family offered a $1,000 reward for Kapone's return, and a few days later, a private citizen added another $1,000 to the total. That number was tripled yesterday when the No-Kill Advocacy Center added yet another $1,000. The total reward is now $3,000.

The Memphis Police Department is also investigating the shelter's security tapes. Anyone with any information on Kapone's whereabouts should call 901-528-0699.