The future is bright for Adam Guerrero's garden.

After a social media outcry to the tune of thousands of supporters, and even some national media attention, Guerrero's story moves toward a happy resolution: He will keep his front yard garden trimmed, install a bubbler and introduce mosquito-eating fish into his backyard pond, reduce the number of on-site worm bins, and install mesh covers on his rain barrels to keep mosquitoes out.

"I never said you could not have a garden," said Potter, clearly concerned about the negative attention his court has received of late. "That's inaccurate. I've always encouraged environmental activism, sustainability, going green, and blight reduction."

Guerrero's attorney — who was brought on board at what Adam calls "crunch time, which translates to "two days ago" — agrees with Potter's assessment.

"I think there was some misunderstanding and the truth is the court really wants to work with this," said Farris Deboard of Burch Porter & Johnson. "There were just a few things we needed to tidy up."

Judge Potter also advocated finding a piece of blighted property for Guerrero to devote to an educational garden. The City of Memphis is currently working to identify vacant land where Guerrero could grow a community garden.

Adam brought along the three young men who volunteer at the garden — Jovantae, Jarvis, and Shaquielle — to witness the proceedings (with the permission of their school and parents.) The three were pleased with the outcome. They say they're eager to get back into the garden, since Adam has been so busy with the case.

"We'll be back at it tomorrow," said Jovantae. 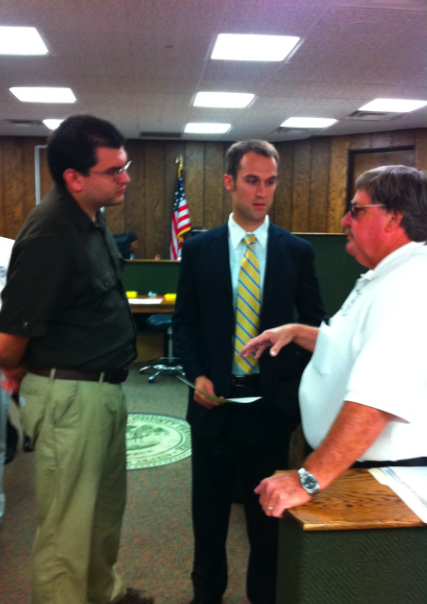 As late as Wednesday evening, Adam was unsure about how to proceed with cleaning up. Within a day, he hired an attorney and, with the advice of eminent horticulturalist Felder Rushing, he made significant progress toward coming into compliance with Judge Potter's orders from August 19.

Code enforcement officers were present to attest to this progress, and their word was enough to convince Potter that a resolution was near at hand.

Guerrero's neighbor, Levi Dowdy, was also present. After the judge decided on a course of action, Dowdy was allowed to voice his concerns — primarily that the changes the judge ordered would not staunch the smell of Guerrero's garden, nor would they solve the rat problem Dowdy attributes to Guerrero's yard.

"All the people on Facebook saying that it's okay, yeah it's okay to them because they probably live in Germantown or in Collierville, and they don't have to smell it everyday," said Dowdy.

Judge Potter replied he would work with Guerrero and his attorney, the health inspectors, and the Attorney General to try to resolve the issue.

A conference with attorneys from both sides will happen within the coming weeks to sort out any of the judge's remaining concerns. Adam's next official court date is set for October 21st.