The nation watched yesterday as Mississippians voted to reject the controversial Amendment 26, an amendment to the state constitution that, if passed, would have defined "personhood" as beginning at the moment of conception. The amendment was put forth by Personhood USA, a national organization devoted to getting personhood initiatives on state ballots throughout the country. 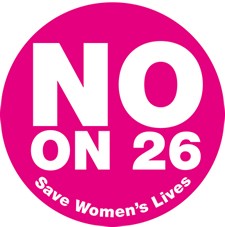 "Word just got out that it was about way more than abortion, that this was going to endanger lives in Mississippi," says Cristen Hemmins, a plaintiff in the ACLU case against Personhood Mississippi last August. The ACLU lawsuit attempted to keep the Personhood Initiative off the November 8 ballot, but was not successful.

"Mississippians do not want the government between them and their doctors," says Hemmins. "Even though the 'yes' side couched it as only being about abortion and tried to make it seem like it was just an opinion poll, word quickly got out that it was really about changing the state constitution."

Mississippians for Healthy Families, an organization dedicated to the fight against Amendment 26, highlighted those broad implications in an advertising campaign (www.votenoon26.org) leading up to yesterday's vote. Featuring doctors, religious leaders, and concerned women, the campaign informed Mississippians about the threat the amendment would pose for fertility clinics, certain types of birth control, and the rights of pregnant women.

In a state where only one clinic provides abortion services, Personhood USA likely saw a smooth road for such an amendment in Mississippi. With support from the largest Christian denomination — the Mississippi Baptist Convention — the amendment was slated to pass, even if by a tight margin. (The day before voters went to the polls, a Washington Post blog reported that 45 percent of voters supported the amendment, while 44 percent opposed it.)

"It was really down to the wire, and I feel like we just barely got the word out there," says Hemmins. "We were so underfunded, it really had to rely on grassroots efforts. When people realized that it was about so much more than abortion, they wanted to make sure their friends and neighbors understood the implications. That's why we managed to defeat it."

The opponents of Amendment 26 also got some help from Republican politicians, whose wavering support made the party line as clear as mud. Haley Barbour in particular waffled over the issue, eventually voting in favor of the amendment, all the while making strong arguments against it.

Hoping to create a legal challenge to Roe v. Wade, Personhood USA has stated that it is not calling it quits. Despite being handed resounding rejections in Colorado and South Dakota, the organization is pushing similar initiatives in states all over the country. (Heads up, California, Florida, Montana, Nevada, Ohio, and Oregon.)

Joan Carr of Planned Parenthood Greater Memphis is acutely aware of the continual wave of threats against women's rights in the United States and in the South in particular. (There is a Tennessee ballot initiative currently in the works for 2014 that would change the state constitution by adding the line: "Nothing in the Constitution of Tennessee secures or protects right to abortion." We will have more on this initiative in the coming months.) But she is buoyed by yesterday's defeat of Amendment 26 in Mississippi.

"It was a decisive victory," says Carr. "That in the most conservative state in the nation, people could band together and defeat this is extremely gratifying and heartening."