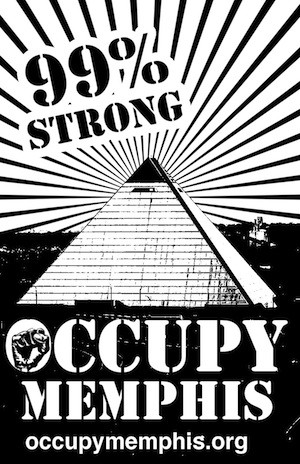 It is unclear whether the OWS protesters will gain re-entry into the park that has been the hub of operations for the movement. (The New York Times has reported on a court-ordered injunction against the eviction, which could allow the protesters to resume occupation of the park.) Nevertheless, in response to the forcible, and at times violent, removal of protesters from Zuccotti Park, Occupy Memphis and the Mid-South Peace and Justice Center will rally in Civic Center Plaza at 5 p.m. and march at 6 p.m.

The following is an official statement from Occupy Memphis:

In light of the overnight police raid on Occupy Wall Street, the 99% of Memphis is coming together today in solidarity to show support.

We, the Occupy Memphis General Assembly, are repulsed by the direct infringement on First Amendment rights granted to the American people by the Constitution. We are disgusted with the repressive tactics used by the New York City Police Department. Citizens were assaulted and arrested for practicing their rights. Journalists were blocked by police. Personal property valued at thousands of dollars has been destroyed.

Occupy Memphis will have a rally today at 5 p.m. in Civic Center Plaza to express our anger and disgust with these actions from law enforcement in an effort to stand in solidarity with Occupy Wall Street. While the City of Memphis has stated publicly the right for protesters to assemble as long as they are peaceful, other cities are not as fortunate.

Following our rally at 6 p.m., we will march to the Civil Rights Museum as a tribute to preceding generations who have fought for our rights; the same rights which have been ignored. While we understand the need for peace and safety, it is unlawful to suppress the voice and assembly of citizens who strive for political and social change.

“We need to speak out for people who tried to be silenced,” said Becky Muehling, one of the protesters with Occupy Memphis. “We need to band together, so that we can show the people trying to suppress our free speech: we will fight.”

“We cannot sit idly by as the livelihood and culture of our country is being trashed,” said Tristan Tran, another occupier who watched the Occupy Wall Street raid live online.

If you believe that the First Amendment rights of freedom of assembly, press, and speech exist always and not just between 6 a.m. and 10 p.m., stand with us.

If you feel that your voice as a citizen has been suppressed by the power of lobbyists and self-serving politicians, speak out with us.

We invite the communities and city of Memphis to occupy this public space; to voice the issues which affect us; and together create solutions for a better society.

We the people shall speak for ourselves.