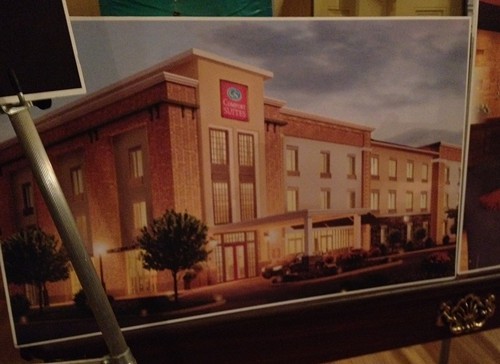 The property is under contract to be purchased by two local businessmen, Rishi Chopra and Jay Kumar. Chopra owns several local Subway restaurants, a liquor store, and a Baskin Robbins. Kumar owns Metro and Advantage Cab companies, and his family has a long history in the local hotel business. A representative from Choice Hotels, the company that owns the Comfort Suites brand, also attended the meeting.

Chopra and Kumar plan to spend around $6 million to purchase and renovate the property. Chopra said the building would be almost entirely gutted inside. The outside of the building will also undergo a full renovation, but the brick wall around the current property will either remain in place or be replaced with a similar wall. The new owners did say they would try to manipulate the outside of the building to match the character of the neighborhood and the future Overton Square development.

"There is absolutely some work to be done. There's been some involuntary copper reclaiming," joked Evan Nahmias, an attorney for Chopra and Kumar.

Some Midtown residents at the meeting expressed concern over a corporate hotel brand moving into the space rather than a smaller, upscale boutique hotel. But Chopra said the economy and their budget simply wouldn't support such a hotel in that location.

The representative from Choice Hotels described the Comfort Suites brand as "upper mid-scale" and said rooms would be priced around $100 per night. There likely will not be a restaurant inside the hotel, but it will offer free breakfast and possibly a small bar for evening drinks.

"We definitely intend to work with Comfort Suites to include local art," Chopra said.

Chopra and Kumar are only in the preliminary stages of planning, and the deal with Choice Hotels is not yet set in stone.

"Now is a great time for us to get involved with this project because of the city's investment and Loeb's investment," Nahmias said.