County Commissioner Steve Mulroy's dog, Buster, may not have much in common with the cats of the House of Mews. But the commissioner says he's pretty sure the two species would agree on one thing: The Shelby County Commission should pass Mulroy's animal care ordinance requiring pet owners in the county to provide food and water to their pets daily.

Mulroy, his dog Buster, and commissioner Sidney Chism held a press conference outside the House of Mews on Saturday afternoon urging county residents to voice their support for the ordinance, which is up for its third and final reading on March 26th. Chism's dog Princeton was supposed to be in attendance, but Chism said he couldn't make it. 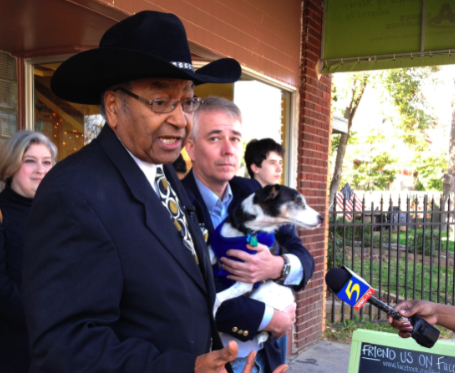 The ordinance requires pet owners to feed and provide fresh water for their animals daily, provide them relief from extreme temperatures, pick up pet waste, and groom animals to avoid health risks.

"County commissioners have been known to fight like cats and dogs, but on this issue, I think we should agree," Mulroy said.

However, that hasn't been the case with this ordinance. At its first reading, commissioners Terry Roland, Wyatt Bunker, and James Harvey argued against it. Harvey said the language was too intrusive, claiming the requirement to provide a pet with fresh water daily went too far. Roland complained that the ordinance put too many rules on people in rural Shelby County, and Bunker didn't like the requirement that pets must be given relief from extreme temperatures.

Now, Mulroy says a libertarian group and the Mid-South Tea Party have come out against the ordinance. But Chism said passing the ordinance is just common sense.

"The ordinance should have been passed, like, yesterday. We need to make sure our animals are taken care of because if we don't have laws in place, who is going to do it?" Chism asked.

There's already a city ordinance and a state law that deal with basic animal care, but nothing that applies directly to the county. Although the state law can be enforced in the county, it only deals with the most extreme forms of cruelty.