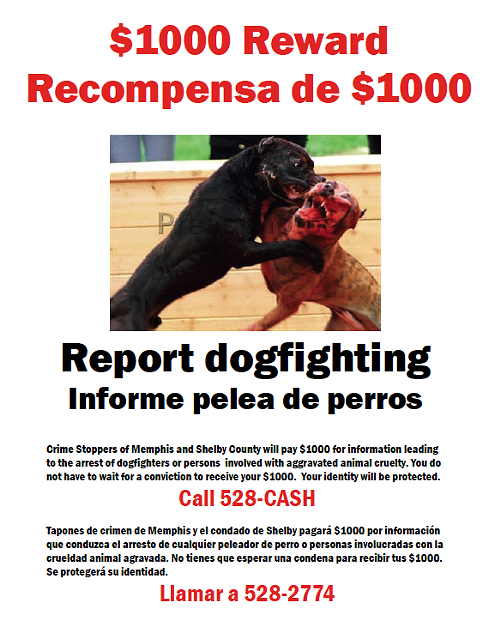 Last summer, CrimeStoppers was given $10,000 by a group of anonymous donors to be used specifically as a reward for tips on local dogfighting rings. No conviction is required for a tipster to get the reward. Only an arrest or issuance of an arrest warrant is required.

But despite the lack of a need for conviction, no tips have yet come in that have resulted in an arrest. Since then, another $2,000 has been added to the coffer. CrimeStoppers director Buddy Chapman is afraid people may have forgotten the money is available, and he's now trying to spread the word once again.

"The whole problem is that we've had dogfighting taking place in the shadows. It's not something the community has seen as important," Chapman said. "But I don't want Memphis to be known as a place where dogfighting is tolerated."

Chapman said it's possible that recent attention to the violent blood sport may have pushed some dogfighting activity into the rural Tennessee and Arkansas counties surrounding Memphis, but he believes local dogfighting will pick back up again in the summer.

"It tends to be seasonal," Chapman said, while explaining that most dogfighting pits are located outdoors.

Many dogfighters have also taken their operation on wheels with trunking (fighting dogs in the closed trunk of a car) or fighting dogs in vans as they're driven along the interstate.

Anyone with tips on local dogfighting operations is encouraged to call 528-CASH. If the tip results in an arrest or arrest warrant, the tipster may receive $1,000. All calls to CrimeStoppers are anonymous.