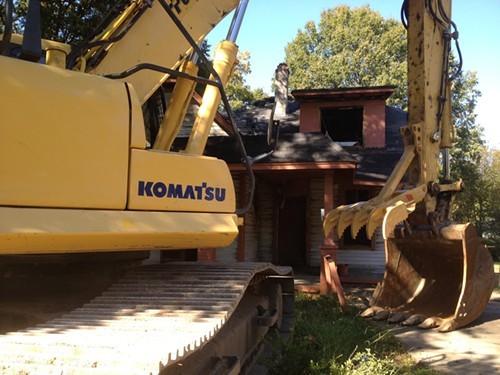 Last year, the city launched 25 Square, a program of the Division of Community Enhancement that targets weed overgrowth and blight one neighborhood at a time. Rather than responding only to blight complaint calls, workers now focus on an area of roughly 25 square blocks, mitigating each lot that needs work.

Since the fiscal year began on July 1st, 14,000 lots have being cleaned up under 25 Square. That's double the city's previous record of 7,891 lots in a year, and this fiscal year isn't even halfway over.

"Budgets are being cut, yet we're doing more with less," said Memphis mayor A C Wharton.

The numbers were announced today at a press conference outside a decaying property at 746 Bullington in South Memphis. A backhoe was parked in the front lawn, awaiting the house's scheduled demolition. Although 25 Square focuses mostly on overgrowth, all blight problems within a target area are addressed. Sometimes, that means sidewalks are repaired. Other times, that can mean houses are demolished.

The Bullington property is located in 25 Square's 200th target area since the program began.