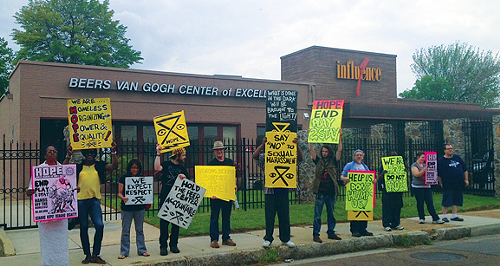 An employee at the Beers Van Gogh Center of Excellence has been terminated for sexual harassment, following a months-long campaign calling for his termination by Homeless Organizing for Power and Equality (H.O.P.E.).

Over the past year, H.O.P.E., an advocacy group that fights for the rights of homeless people, has received complaints from their members and former employees of the Beers Van Gogh Center alleging that peer counselor Hervelle Williams had made unwanted sexual advances toward them and had used homophobic language. The center is run by the Tennessee Mental Health Consumers Association and provides housing, support, and Medicaid services for people with mental illnesses.

"As I heard our members share their experiences, I was stunned” said H.O.P.E. member Toni Whitfield when H.O.P.E. began its campaign. ”This situation with this staff person is out of control including offering one of our members $20 to show him her breasts, telling her and others about the size of his penis, and asking a woman if she wanted to be in a 'three-way' with him and his girlfriend."

"It did not take long before we learned that this was far from an isolated incident. In fact, we think that this is part of a much larger systemic issue in our homeless services network. Folks on the streets call it 'play to stay,'" said H.O.P.E. organizer Paul Garner.

Last summer, H.O.P.E. members began weekly demonstrations outside the center to raise awareness about Williams' record of alleged sexual harassment. Each Thursday at noon, members gathered outside the center on Madison, holding signs that read "Play To Stay Is Not Okay" or "Say No To Sexual Harassment.''

Click here for more of the Flyer's coverage on the situation at the Beers Van Gogh Center.