The atmosphere inside Shelby County Schools Frances E. Coe Administration building was more pep rally than public meeting on Thursday evening as parents and students from the 13 Shelby County Schools (SCS) that are being considered for closure chanted and displayed signs supporting their endangered school. 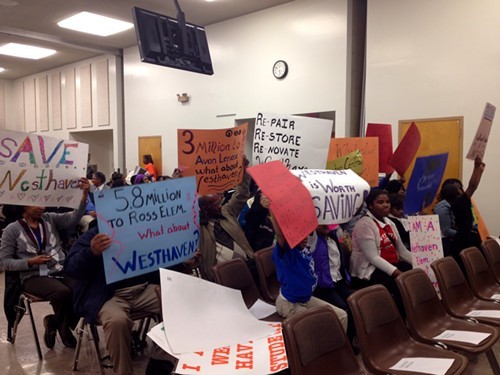 SCS superintendent Dorsey Hopson briefly addressed the standing-room-only crowd to explain why the schools may close and what parents can do to prevent some of the closings. He said the schools were chosen because of low enrollment and low academic achievement. Many of the schools on the list currently have less than 300 students. One example Hopson focused on was Northside High, which has 293 students enrolled even though the building has a capacity of 1,061 students. Westhaven only made the list because the building is falling into disrepair, according to Hopson, who said it was "coming up on not being safe for these babies to be in."

"We will come to every one of these schools and have community forums inside these schools," Hopson said. "We're looking for 'Does the community have a better plan than closing the school? Is there a community plan to increase literacy?' You don't need money [in the budget for parents] to volunteer to read to these babies."

Hopson said some of the schools on the list may not close if the community can come together and improve academic performance through tutoring and other programs. He said SCS would try to come up with alternative uses for the buildings of schools that do end up closing.

"I know closing these schools will have a negative impact on the community. We will have to find other uses for those buildings," Hopson said.

After Hopson spoke, parents, students, alumni, and other supporters of the endangered schools were invited to speak. In an eloquent and passionate speech, Gordon Elementary fourth-grader Daniel Peoples, the president of his class, told the room he was "sad and disappointed my school is on the list to close. In my opinion, that is a big mistake."

His mother, Dena Peoples, spoke about how speech teachers at Gordon had worked wonders with Daniel. She said his last report card boasted straight A's.

Jade Jordan, a third-grader at Westhaven, and state representative Raumesh Akbari shared a similar sentiment about Westhaven. Both said SCS should spend the money to renovate the building rather than closing the school.

"We want our school to remain open. Repair it. Restore it. Or renovate it. Don't close Westhaven. Just fix it," Jordan said.

And high school senior Sie Bradley made a plea for Northside High: "We may not have the largest school body, but we have one thing — the urge to learn."