In about six years, all of the gates at Memphis International Airport will be consolidated into the existing B concourse as part of a "modernization" plan announced during the Memphis Airport Authority's monthly board meeting Thursday morning.

The $114 million project is an effort to move all of the airline flight operations closer together. Currently, operations are spread over three concourses, and some areas are walled off since Delta removed its hub status and has been steadily reducing flights. 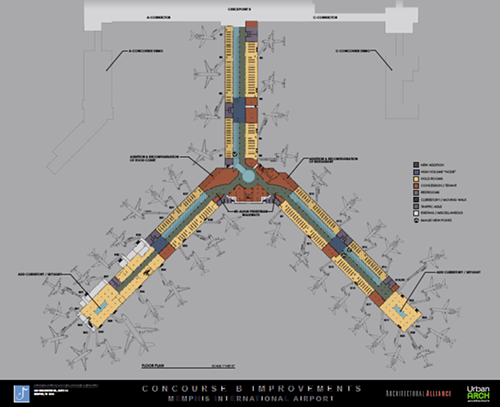 Although the airport as a whole will be downsized since the south ends of concourses A and C will be demolished, concourse B will see enhancements. Walkways will be nearly doubled in size to give passengers more room as they move to and from gates, and moving walkways will be installed. The ceilings will be raised, and more windows will be added to provide natural light. During construction, the airport will see seismic upgrades. About 60 airline gates will remain open for future growth. 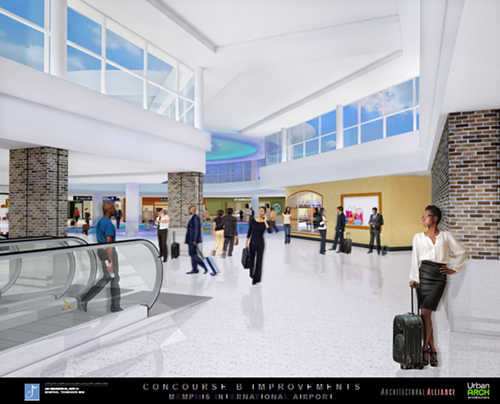 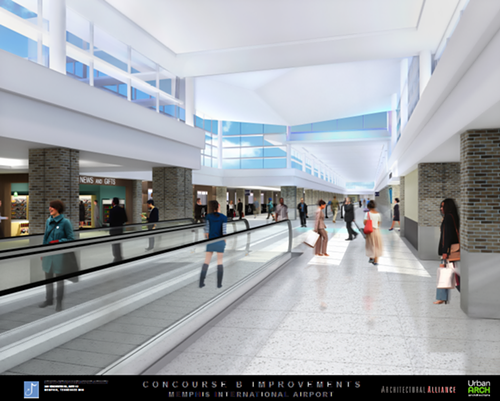 Jack Sammons, chair of the Memphis Airport Authority board, told the board that all of the airlines that operate out of Memphis International have advocated for this change. Removal of the south ends of concourses A and C frees up more taxi space for airplanes, and it will create a livelier B concourse since all concessions would be relocated to that area. Over the past year, a number of airport concession businesses have closed due to the loss of the Delta hub.

Sammons said he recently paid a visit to Southwest Airlines headquarters in Dallas to ask them to bring more flights to Memphis, and he said Southwest expressed support for the airport's construction plan.

"They want to prune the tree, and the areas on south A and C concourses are the way," Sammons told the board.

Memphis Airport Authority president Scott Brockman told the board that much of the $114 million price tag would be funded through federal and state grants that are made up of taxes paid on airline fuel and airline tickets. The Airport Authority does not anticipate that the project will require the issuance of any additional general airport revenue bond debt.

"Passengers have a choice. Hundreds go to Little Rock everyday on perhaps the most dangerous highway in America [to fly out of the airport there]," Sammons said. "We want them to know that the Memphis airport is the airport of choice. To do that, you have to have a modern facility."

Below is a map of the current airport gate layout. The south wings of A and C concourses will be demolished.