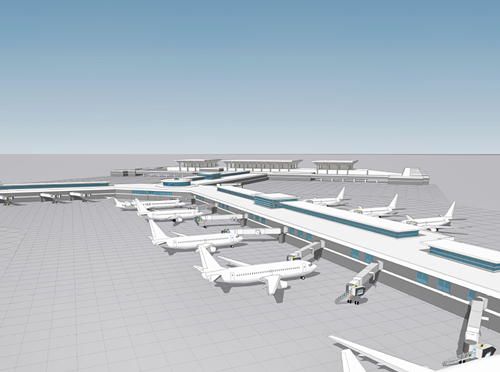 On Thursday, the Memphis Airport Authority board announced their plans to downsize the airport by demolishing the south end of the A and C concourses and consolidating airline flight operations into an enhanced and expanded B concourse.

Walkways in the B concourse will be nearly doubled in size to give passengers more room as they move to and from gates, and moving walkways will be installed. The ceilings will be raised, and more windows will be added to provide natural light. During construction, the airport will see seismic upgrades as well.

The project is slated to cost $114 million, much of which will be funded through federal and state grants. Forrest Artz, vice-president of finance for the Memphis Airport Authority, provides a breakdown of the numbers.

The federal grant is the AIP, the Airport Improvement Program. Those monies are generated each time a person buys an [airline] ticket. There's a tax on everybody's airline ticket. That money is collected by the federal government, and it's intended use is for airport capital improvement projects across the country. Every airport is entitled to a certain amount of AIP dollars to be used for their capital programs. We make an application on those monies on an annual basis, but we have to provide them a five-year program of what our program is going to be.

So we may put in the first year of our modernization program for the request for those monies this year, but over the next four or five years, the Federal Aviation Administration (FAA) will know exactly what our funds requirement will be for the full program.

On the state side, it's quite similar. The state dollars are derived every time an airline pays for jet fuel, they're required to pay a tax to the state. That tax is collected and distributed back out to the airports within the state of Tennessee for capital purposes. We receive an annual entitlement of those dollars, and we put our financing program together so they know what we're doing over the next five years as well.

At this point, we're still working on what the different percentages will be of the federal and state portions, so I don't have any concrete numbers at this point. But we'll need to have that completed to send a schedule to the FAA on April 1st.

But then we would have debt service payments over the next 25 or 30 years. With that, you have not just the principle but interest, just like a note on your house. When you pay the interest over that 25 or 30 year period, just like your house payment, you pay a whole lot more money than if you were able to pay it with just the principle amount all at one time. But we're not anticipating issuing any general airport revenue bonds.

I think most people want to know how this will affect their wallets.
As a result of the way that we're structuring, it won't have any impact on the rates and charges that are associated with the airlines. There will be no impact on what the airlines have to pay us.

But what about the debt service the airlines have to pay?
The debt service money, they wouldn't have to pay us, but we have had discussions with them that, because of the reduction in debt service, we can do this program without having to issue any new general airport revenue bonds. They're very much on board for that, because, the interest savings in 25 years is huge.