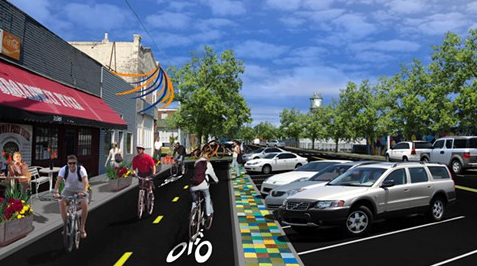 The ground-breaking for the two-mile bike path that leads from Overton Park to the Shelby Farms Greenline is scheduled for Monday, February 24th at noon.

Mayor A C Wharton will be on-hand at the ceremony for the Hampline, named for the nickname of Binghampton, the neighborhood the lane will run through. The path will be the first two-way bicycle track (one lane in each direction on the same side of the street and a buffer from traffic) in the city.

The ceremony will take place on the green space between Broad Avenue at Hollywood Street and the new bicycle plaza and entrance to Overton Park. The first section of the Hampline will cost $80,000, which is being paid for by FedEx.

The entire project will cost $3.6 million, all of which has been raised. About $78,000 of that cost was raised on the crowd-source funding website, ioby.com. The city is contributing $2.3 million through a federal Congestion Mitigation and Air Quality transportation grant. Other local and national grants are funding $839,000, and local foundations, corporations and other private donors have contributed $383,000.

The other portions of the Hampline will be constructed in the late summer and fall of this year.