Shelby County Schools Board Votes To Close Some Schools, Keep Some Open 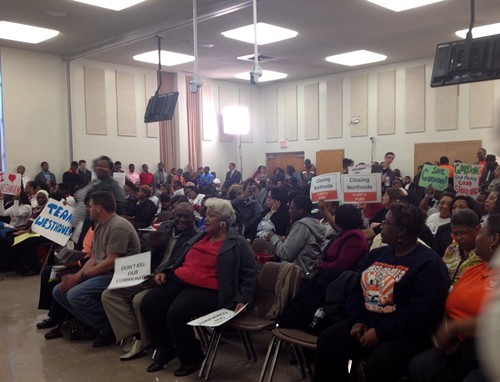 Nine of the 13 schools on Shelby County Schools' original list of proposed school closures will be shuttered as a result of Tuesday night's vote at the board's business meeting.

But the board voted to keep Alcy Elementary open, to defer their decision to close Northside High School for one year, to combine Riverview Elementary and Middle into a K-8 school, and to ask the Shelby County Commission for $11 million to build a new school for Westhaven.

Corry Middle, Cypress Middle, Gordon Elementary, Klondike Elementary, Lanier Middle, Graves Elementary, Shannon Elementary, and Vance Middle will be closed effective the end of the year. Students from those schools will be moved to neighboring schools.

The schools were chosen for closure because of low enrollment and low academic achievement. Many of the schools on the list currently have less than 300 students.

Westhaven Elementary, however, does not have low enrollment or poor grades. That school was originally slated for closure because the building is in poor condition.

"Whitehaven is an anomaly. The building is in the worst condition in the district, but it's not the people of Westhaven's fault," SCS Superintendent Dorsey Hopson told the standing-room-only crowd Tuesday night.

The board voted to move Westhaven students to neighboring Fairley and Raineshaven Elementary Schools while they await a decision from the county commission about constructing a new building to house the student bodies of all three schools. Board member Shante Avant pushed the board to allow Westhaven students to stay in their current building for at least a year while the board awaited the commission's decision. But Hopson argued that, should a major building repair be needed at Westhaven over the next year, the board couldn't afford to take that risk. He said Westhaven needed to be demolished.

As for keeping Northside open for at least another year, Hopson said he would work with the community on getting their enrollment up.

"There are more kids zoned in Northside now than kids who go to Northside. We need to attract those students back," Hopson said.

The board had originally proposed closing both Riverview Elementary and Middle, but now they'll be consolidated into a K-8 school. Hopson said Alcy Elementary was being allowed to remain open because although "Alcy has very low enrollment, building utilization is very high."

Hopson told the board he didn't yet have any plans for the nine school buildings that will be vacated, but he said he would have proposals in place by the end of the year.