The Med is not “The Med” anymore.

The health care system that has operated as the Regional Medical Center at Memphis, or commonly called “The Med,” is now called Regional One Health. News of the name change and re-branding effort came at an unveiling event Wednesday.

Regional One Health will be the umbrella group for the system’s acute care hospital, stand-alone specialty centers, and primary care clinics.

The Downtown hospital will now be called the “Regional Medical Center” instead of the “Regional Medical Center at Memphis.” The specialty centers will be renamed and re-branded, becoming the Regional One Extended Care Hospital, for example. Finally, the once-called “Loop Clinics” will be renamed to reflect their location - the Hollywood Primary Care Center, for example.

“The main thing we want to evoke is our coverage area,” said Regional One CEO Dr. Reginald Coopwood of the name change. “The ‘one’ implies that we’re one team, one family. And it’s not ‘health care,’ it’s ‘health.’ We’re looking to improve people’s health and not just take care of people who are sick.”

The effort is a big move for a health care system on the verge of closing some of its key components about five years ago because of financial woes. New management and some new funding mechanisms have brought stability and new dollars to invest in the operations of the system. 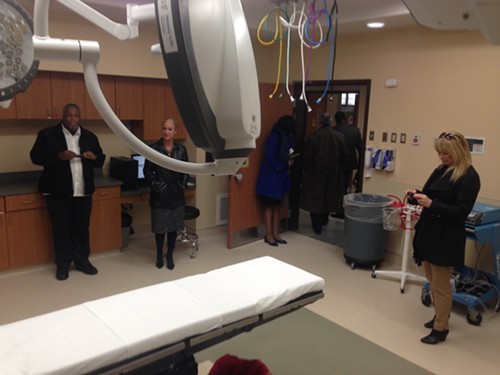 For example, Regional One leaders showed off the newly finished and opened floors of the renovated Turner Tower. The building is on the hospital’s campus but went largely unused for years because of scarce capital funds. The $40 million project has brought the system a new outpatient surgery center, and a long-term acute care center. Both are expected to make the Regional One more competitive in the Memphis medical marketplace.