Parents of Students Being Zoned Out of Bartlett Schools Speak Out

Rhonda Davis has a grandson who currently attends Dexter Middle School, and before Bartlett formed its own municipal school district, he would have been on track to attend Bartlett High School. But since her grandson lives in an unincorporated "doughtnut hole" area outside the Bartlett city limits, the proposed Shelby County Schools rezoning plans would have him going to Ridgeway High School instead.

Some of his classmates who live in Memphis reserve, rural reserve, or unincorporated areas would be moved to Cordova High School. That's because Shelby County Schools (SCS) couldn't find the capacity in any single school for all 440 or so high school kids that are affected by the rezoning proposal.

"He has gone to Dexter from K through now, and he's going to be split from friends he's known his whole life," Davis told a panel of representatives from SCS at a rezoning meeting at Kate Bond Middle School Tuesday night.

Although the kids being moved to Dexter Elementary and Middle live about seven-and-a-half miles from their proposed new schools, Sharpe said Dexter was chosen because "we wanted to make sure elementary students could ride the bus with their older siblings, and it has more adequate capacity and is comparable academically" to their old schools.

"We are splitting the cohort because there is no way to get that many students into Cordova High," Sharpe said.

White Station High School would have been even closer for some of those students, but Sharpe said there was no space there for additional students.

Linda Macklin has a daughter in tenth grade at Bartlett High, and although Macklin hadn't studied the map well enough to determine whether her child would be moved to Cordova or Ridgeway High, she told the panel that Ridgeway wasn't an option.

"I have friends with kids at Ridgeway, and it is an under-performing school. It is not as good of a school as Bartlett. It is scary for me for my child to be changing schools in the tenth grade," Macklin said.

The SCS board will vote on rezoning before any changes are finalized. 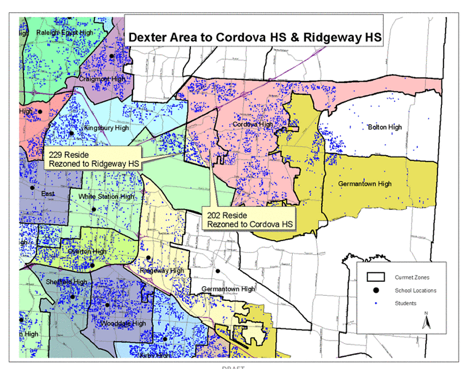