The price of conventional petroleum gas by the gallon has increased lately, but there’s an alternate route drivers can take to save a few dollars.

Compressed Natural Gas (CNG), made from methane stored at a high pressure, currently goes for $1.69 by the gallon locally. Memphis Light, Gas, and Water (MLGW) opened its first CNG public fueling station at its North Service Center (1130 Tupelo St.) this past July. 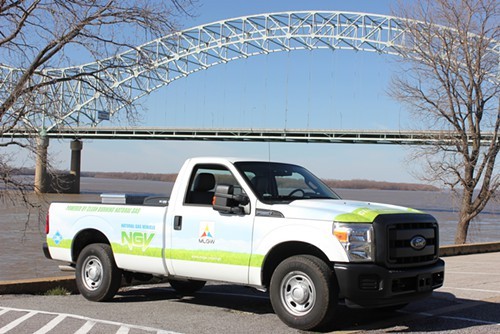 And the utility company is currently in the construction phase of a new $2 million CNG facility.

“It’ll have two islands, four lanes, [and] two high-flow nozzles, which will let the trucks fill up faster than what we currently have at the other facility,” Collins said. “The other aspect of the facility on the south side, it’ll let us expand our fleet of natural gas vehicles, so that vehicles stationed at the south work center can fill up [there].”

MLGW currently has 76 natural gas vehicles and more than 20 on order.

Collins said there’s been an increase in commercial and industrial vehicles using the CNG fueling station at the MLGW North Service Center.

“In March, we sold 10,000 gallons of compressed natural gas,” Collins said. “We’re seeing growth every month. When we build this new facility, we anticipate having three firms that have long haul tractor-trailer trucks to be filling up at the new station. Those three firms alone are going to be 20,000 to 40,000 gallons of CNG a month.”

The current price of CNG per gallon has only increased a dime since late last year. The price is anticipated to drop as the weather warms up locally.

According to the U.S. Department of Energy's Alternative Fuel Data Center website, CNG powers about 112,000 vehicles in the country and roughly 14.8 million vehicles worldwide. CNG vehicles provide environmental benefits such as reduced pollution and lower levels of emissions. Some new vehicles are already designed to take CNG, but older models must be converted to use the fuel. It costs about $9,000 to modify a vehicle to run on natural gas.

With CNG per gallon about half the cost of conventional gas and more than half the price of diesel per gallon, Collins said CNG-fueled vehicles is "a trend growing rapidly" across the world.

Initially, it was stated that MLGW had plans of building public CNG fueling stations at all of its service centers. Collins now says the number of facilities they will build depends on how the market develops.