No new taxes were proposed in Memphis Mayor A C Wharton’s budget for the next fiscal year, which he delivered to the Memphis City Council Tuesday, and it put a focus on reforming the city’s pension system and healthcare plan for retirees. 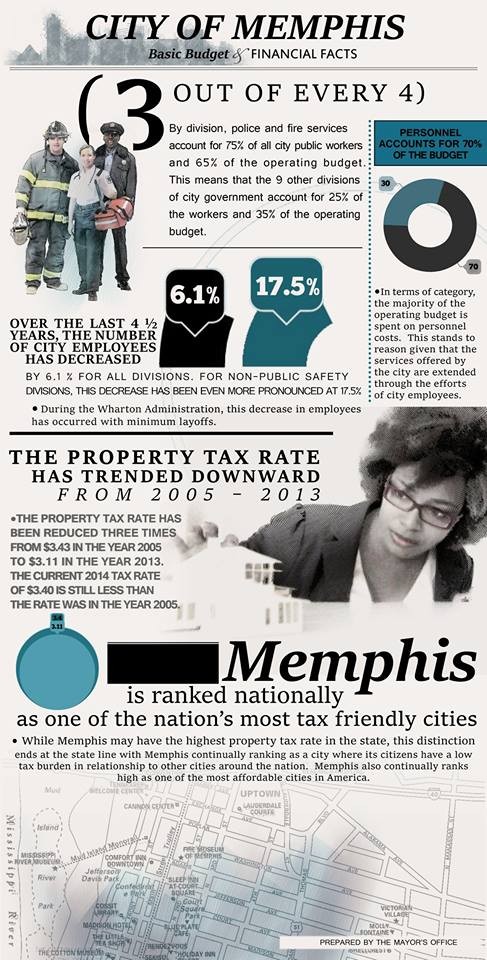 Wharton’s budget:
• Holds the Memphis property tax rate at $3.40 per $100 of assessed value.
• Totals $596 million, $18 million less than the current budget.
• Moves the current pension plan from a defined benefit plan to a 401(k)-style defined contribution plan. Doing so will generate savings and reduce the city's financial risk, Wharton said.
• Increases next year’s payment into the pension fund by $15 million for a total of $35 million. The increase would be paid for with savings in healthcare benefits and cuts in city government.
• Establishes a special reserve fund of $15 million for public safety if the council decides more money is needed for police and fire next year.
• Increases the Memphis Area Transit Authority budget by $1.5 million.
• Invests $23 million in a plan to demolish the Raleigh Springs Mall and redevelop the property into a community center, police precinct, and library branch. The project includes additional bays that could be leased for retail and other businesses.

The mayor’s budget proposal kicked off what will be nearly two months of discussion on the city’s budget by Wharton’s administration and the city council. The talks yield a final budget approved by the city council. those talks will likely end around the end of June before the city’s new fiscal year begins in July.

Wharton told council members Tuesday “I’ve done my best” to balance the city’s wants and needs with its available resources and said doing so is the “most difficult task we face as elected officials.”