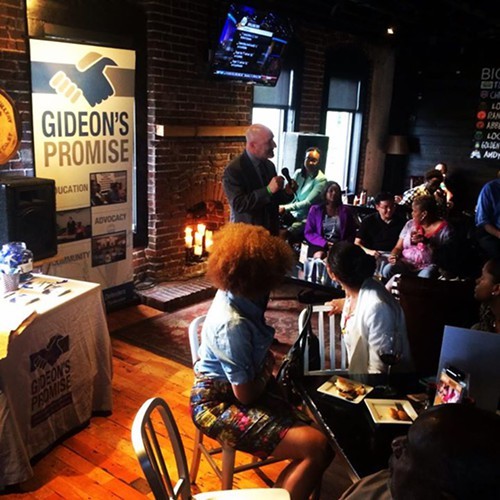 Over sliders and beer, advocates and attorneys met together upstairs at the Local Gastropub in Overton Square to talk about how to improve public defense.

Gideon’s Promise, the group behind the event, is an organization for public defense reform, and they are working with attorneys to create a “community of public defenders,” according to organizers.

At the free “Burgers and Brews” event Thursday evening, attendees gathered to hear Jonathan Rapping, president and founder of the organization, speak, as well as those from the Shelby County Public Defender's Office.

According to Rapping, there are three challenges that public defenders face.

“The most obvious one is funding,” Rapping said. “There aren’t enough lawyers. There aren’t enough resources. There’s a structural problem, where in many public defender systems, the judges appoint the chief public defender and the judge [wants to] move cases as opposed to necessarily making sure poor people get justice. They have pressures to move cases. You might have funders who have something to do with the appointments of the public defenders, and they want to make sure it’s done cheaply.”

Rapping got his start as a public defender in well-resourced Washington, D.C., where he said defendants who could not afford a lawyer were still provided the same justice as others who could. That story changed when he moved from D.C. to Georgia and then throughout the South.

“I really started to see these systems where really passionate, young public defenders would go in for the right reasons and have that passion beaten out of them,” Rapping said. “They would either quit or resign to the status quo. This organization really developed to be a program that not only provides training but provides support and inspiration to these lawyers so they don’t lose their idealism.”

The issue of whether or not public defense is actually working does not only affect those who commit crimes, he said.

“There are people in the criminal justice system who didn’t commit a crime and we don’t know until the end of a fair process whether or not the person [did],” Rapping said. “We know more than 300 people have been exonerated using DNA. We have no idea how many [innocent] people are in the criminal justice system when they have no forensic evidence.”

In 2007, 964 public defender offices received six million cases where the defendant could not afford to pay, according to the Department of Justice’s most recent available data. According to Gideon’s Promise, this means the quality of the defense goes down.

“We have to help people understand that this goes against our fundamental values,” Rapping said. “Citizens certainly need to become educated about what’s happening in the criminal justice system. I think, once aware of it, people are just moved to act.”

Rapping also believes this is a nonpartisan issue.