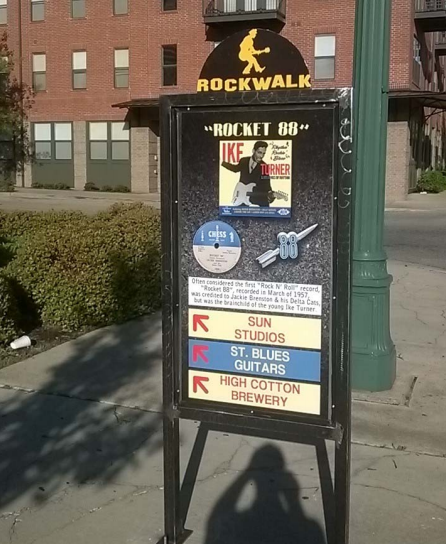 The Downtown Memphis Commission's Design Review Board has approved signage to be placed near historic Memphis music sites, making up an overarching way-finder project called "Rockwalk." The 12 signs will help tourists and Memphis music aficionados find their way through downtown's Edge neighborhood.

"I got the idea seeing people stumbling up Monroe [Avenue] looking for Sun Studio," said Mike Todd, president of Premiere Contractors, who submitted the proposal. "It's a lot safer to bring them down Monroe and keep them in the neighborhood."

"You're walking in the rock 'n' roll mecca," Todd said.

“[Signs facing west] also include information about music and other related attractions in the Edge that hopefully will urge tourists to linger in the area and experience its richness on a deeper level,” the proposal reads. “On their return walk, the east-facing side of the signs — ‘Facts on the Edge’ — address some of the history of the buildings, businesses, and their stories of rebirth.”

The Downtown Memphis Commission's staff report originally recommended rejection of the signs because of the "atypical nature of the request," as the signs would be privately-owned but on public property. Other concerns included the lack of precedent that had not been set yet by the DMC and the issue of off-premise advertising since some of the signs point towards for-profit businesses.

Brett Roler, the director of planning at the Downtown Memphis Commission, said the board did not agree with the staff report’s “conservative” recommendation.

“This was a case where the approach was a little more conservative — to grant approval for the four signs that have already been constructed and then have the applicant work with the neighborhood to make sure the signs really reflect the consensus about the vision for this way-finding system,” Roler said.

The project itself has been temporarily approved for a year, but the project can be extended.

“The board felt like it was such a good idea that all 12 signs would be appropriate,” Roler added. “The board also made a point that if you only approve four signs, that’s not really enough to serve a complete way-finding function. You need more to direct people all the way through the district.”

Premiere Contractors will maintain the signs, according to the proposal submitted to the board. Now that approval has been granted, Premiere Contractors stated plans to go through fundraising tool ioby to crowdsource funding for the signs, which cost $1,250 per sign to purchase and install. Todd designed the overall signs and superintendent of the contracting company Mike Davis constructed the frames, while Justin Baker of Sign Delivery designed the graphics.