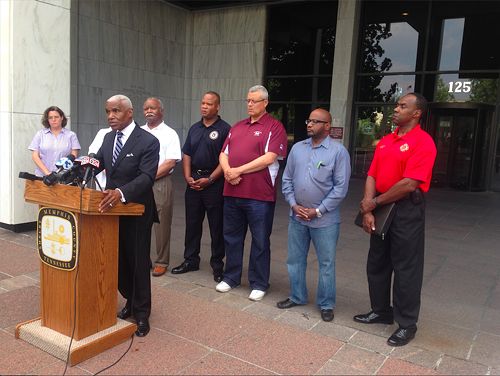 A work slow-down action by Memphis Police Department [MPD] officers likely did occur over the Independence Day holiday weekend as 308 officers have called out sick since as of June 30, according to MPD director Toney Armstrong.

Memphis police officers and fire fighters have been angered over recent cuts to their health care benefits, salaries, and proposed cuts coming for their pension benefits. Police and fire employees staged a public protest in front of Memphis City Hall to voice their opinions publicly last week.

Memphis Mayor A C Wharton convened a news conference at Memphis City Hall Sunday to acknowledge the work slow-down, a so-called “blue flu,” saying it was “not happenstance” that so many officers were out at the same time and that thinking the absences were anything other than a job action “defies common sense.”

Before the conference, Wharton called in the top brass of his administration to city hall for meetings on the topic and said they had also been in contact with the leaders of the Memphis City Council.

“I will acknowledge that this is more than normal for us and it would appear there is some type of work slow-down action in place,” said MPD director Toney Armstrong. “It’s my message to my officers and the citizens as well that [the MPD has] a responsibility to provide public safety.”

Officers from the Shelby County Sheriff’s Office [SCSO] were called in to help the MPD over the holiday weekend, Armstrong said. That was partly due to the work slow-down, he said, but noted that the SCSO steps in to help MPD during major events like Memphis In May and New Year’s Eve.

Asked if he was disappointed in the MPD officers that called out, Wharton said he’s more interested in solutions to the MPD’s grievances.

“We understand the grievances of the police officers and their desire to be heard,” Wharton said. “What I cannot accept is that the public — many of whom don’t vote [in city hall] or sit in my seat — should be held hostage on this.”

Armstrong said a process in place to review those officers who called out sick recently. Corrective actions against them range from and oral reprimand to termination, he said.

Alvin Benson, director of Memphis Fire Services Division, said he did not see a “noticeable spike” in recent sick days among Memphis fire fighters and had to make no special arrangements for fire services over the Independence Day weekend.