Arrests Made at Fast-Food Strike 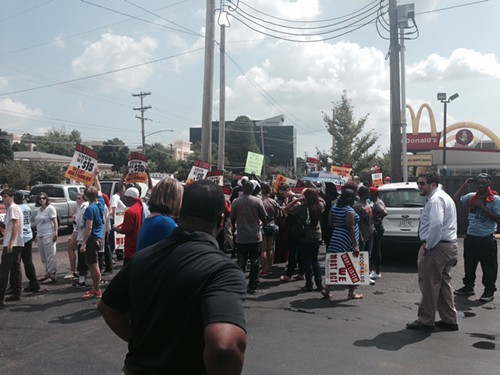 More than 10 protesters were arrested earlier today for blocking traffic on Poplar just east of White Station. In one of the largest fast-food strikes that the city has seen, workers from St. Louis and Little Rock joined fast-food and restaurant workers from Memphis to protest low wages. The group met at multiple fast-food restaurants before ending the rally at the McDonald's on Poplar in East Memphis. Wearing shirts that read "Memphis 15," "Little Rock 15" and "St. Louis 15," the protesters called for the wages of fast-food workers to be raised to $15 dollars an hour and for the right of fast-food workers to form a union. 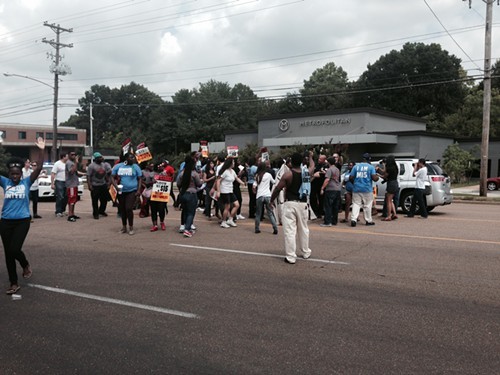 After a series of chants of "We've got the Blue Flu, too" and "We can't survive on $7.25," a group of protesters marched into the street, causing the eastbound lanes of Poplar to be blocked for a few minutes. Police then confronted the protesters in the street, where more than 10 were arrested and loaded into a Blue Crush police vehicle. Following the arrests, police slowly advanced on the crowd, backing people up through the parking lots of local businesses before ultimately leading the crowd to the parking lot of Bed Bath and Beyond, where buses and vans were waiting for them.