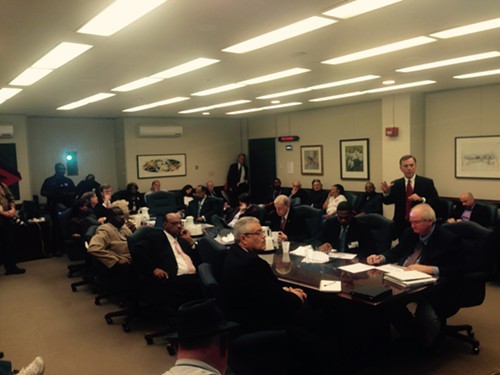 The Memphis City Council waded into pension reform Tuesday with a long discussion and some new proposals.

The current pension plan is what’s called a defined benefit plan. That means city employees are guaranteed to get the same amount of money upon retirement for the rest of their lives. That plan puts the investment risk on city taxpayers because no matter how the market reacts to the investments that back the plans, the benefits stay the same.

Memphis Mayor A C Wharton proposed a defined contribution plan earlier this year. In those types of plans, the entire investment risk is put on the employee. The proposal would have worked much like a 401(k) plan common in the private sector.

This new hybrid plan would save the city between $5 million and $10 million annually, according to the city finance director Brian Collins.

Inclusion into any new plan seemed to be the prevailing issue on the minds of council members Tuesday.

The new Wharton plan would allow current retirees or those vested in the current plan (who have been contributing to it for at least 10 years) to remain in the plan. New employees and unvested employees would be moved to the new pension plan.

Council member Myron Lowery floated an amendment well before Tuesday’s meeting that would allow all current employees to remain the city’s current retirement plan. Only new employees would have to go into the new plan, according to the amendment.

Some council members wanted to see how changing that part of the plan would affect the final financial figures. Others, like council members Wanda Halbert and Janis Fullilove, wanted to make the new plan mandatory only for new employees.

Finance director Collins said allowing all current employees to stay on the current plan would cost about $5 million.

Pension reform became an issue at Memphis City Hall when a report from PricewaterhouseCoopers said the hole in the pension system was more than $700 million. The city stopped paying paying what it should to the system during the recession. These lower payments made the hole even bigger.

The issue came to a head when the state passed a new law this year mandating municipalities to pay the full amount of the required payment. The law goes into effect in five years.

The pension gap has shrunk since the first PwC report. It’t now at about $551 million. But filling that gap will take “several decades,” according to Collins. That means the city will have to divert millions of dollars into the fund each year, money that could be used for parks, police, paving, and more.