The Pyramid is “teeming with activity with the work of construction, creative, and design teams,” according to the latest update on the construction project that is changing the former arena into a huge, “one-of-a-kind” Bass Pro Shop.

Crews have been transforming the Pyramid into a cypress swamp with fish, alligators, 24 "faux" cypress trees “stretching to the upper reaches of the building,” the new report says. Here’s some other new work included in the report:

• Additional water features that brought the total gallons of water in The Pyramid to 600,000 gallons.
• Two elevators rising 254 feet from the floor to the apex, where the 23-year-old dream of an attraction at the top is being met.
• A restaurant and aquarium at the top of The Pyramid and two cantilevered glass balconies, similar to the Grand Canyon Skywalk, that offer spectacular panoramic views of Memphis and the Mississippi River.
• Ducks Unlimited’s National Waterfowl Heritage Center.
• In addition, in response to community input, only one sign on the south side of The Pyramid.
• The two elevators have been constructed and the operating systems are being installed.
• Construction has begun on the balconies, the bowling alley, restaurants, stores, and the hotel rooms. Two huge aquariums — one for the ground floor and one for the apex — are on site and will be installed in the near future. 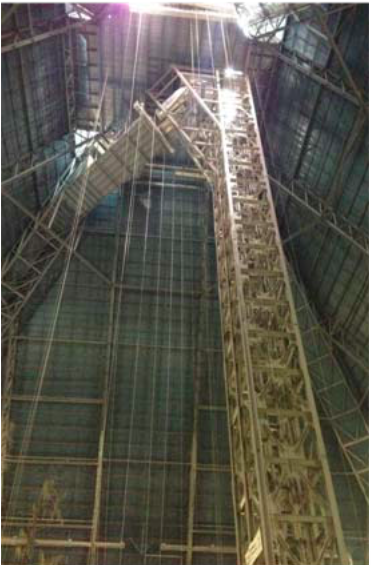 What’s Happening Now?
• Attractions to the apex are under construction
• Full service hotel now includes spa and fitness facility and construction is under way
• Installation of sculptural trees measuring up to 100’ tall and 8’ in diameter are underway
• Elevator tower connecting the retail floor to the rooftop facilities has been constructed
• Swamp installation including the alligator pit is 75% complete
• Finishes for retail store and Ducks Unlimited National Waterfowling Heritage Center have started
• State’s I‐40 seismic work scheduled to end in October, making way for construction of Bass Pro Boulevard
• (Workforce Investment Network) facilitating hiring for Bass Pro Shops

“There is no destination retail in America that will rival Bass Pro Shops at The Pyramid,” the report says.

The latest update on the project was delivered to media outlets Thursday from Memphis City Council member Myron Lowery. It is originally dated September 24, 2014. Lowery said Robert Lipscomb, the city’s director of Housing and Community Development, gave it to council members and some members of Mayor A C Wharton’s administration in September but it was never shared with the media.

A new tour of the facility for the media and city leaders is scheduled for next week.