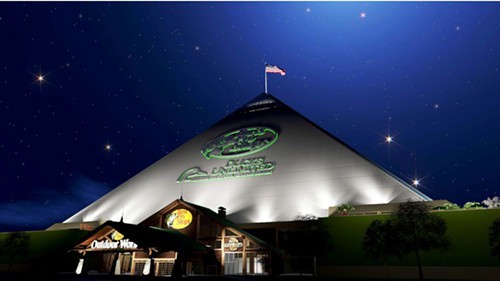 Imagination and enthusiasm, it seems, pushed the opening day for Bass Pro Shops in the Pyramid back about six months to May 1, 2015 from a previously announced date of December 2014.

Johnny Morris, founder and CEO of Bass Pro Shops said his company has gotten lots of questions about the Memphis Pyramid project, namely, he said: “What in the world is going on in this giant building called The Pyramid?” “What’s this going be like?” “When’s it going to be open?”

The new opening date was the biggest news to come from Thursday press event. Company officials said they pushed the open date back so they could open the entire establishment — the store, the restaurants, the hotel, and the Ducks Unlimited Waterfowling Heritage Center — all at the same time.

Here’s how Morris explained it:

“This started off as kind of a bait and tackle shop. It’s evolved to be considerably more than that. I just say from everybody in the company and all involved…we’re very proud of the progress that we’re making and the grand plans that have been developed.”

“It’s an undertaking that’s become probably larger than any of us probably envisioned at the outset. Partly, that’s because as time’s gone on we’ve become more and more excited about the potential of this facility here in Memphis."

"I can tell you that this — what is taking place here and outside of our headquarters store in Springfield, Mo. — represents the biggest commitment we’ve ever made as a company in retail, not only financially, but also in terms of the incredible amount of passion, and thought, and energy that’s going into this.”

RETAIL
David Hagel, current manager of the Memphis Bass Pro Shop location on Macon, will oversee the retail end of the business inside the new Pyramid location.

He said Thursday that the May 1 opening date was “consistent with our original plan.”

“We wanted, contemplated December but we want to open the entire establishment at one time,” he said.

But outside of news about the new opening date, Thursday’s press event was all about details and color, what visitors can expect when they visit the new Bass Pro Shops at the Pyramid.

Hagel said Bass Pro shoppers can expect all their favorite hunting and fishing items. But the store will also features “shops within shops.” Havel said to expect a Beretta gallery, a Sunglass Hut, and duck call shop all inside the store. The Memphis store will have a focus on duck hunting with one the largest collections of waterfowling gear anywhere, Morris said.

Hagel said officials are now in the process of re-designing a boat ramp that will lead store visitors from the Pyramid down to a dock in the Wolf River Harbor. That dock will be the spot for some of the company’s fishing and bow-fishing events, Hagel said.

The Pyramid store will also feature Uncle Buck's Fishbowl and Grill, a nautical-themed restaurant with a 13-lane bowling alley. The alley is designed to look like it's underwater with ball returns that look like sharks and alligators.


DESIGN
Tom Marshall, architect and principal with Memphis firm O.T. Marshall Architects, said the project has been a “tremendous effort” and is “almost beyond words.” But he said the delays in the project will pay off.

“Had we built the store that was first designed and contemplated and opened a year ago, it would be but half as grand as it is now,” Marshall said. "Although it has taken a bit more time, it is very, very well worth it.”

Key to Marshall’s remarks on the Pryamid’s new design was a focus on the new dining and drinking spot at the apex of the Pyramid. Called the “Sky High Catfish Cabin,” the access given by the new space will be the fulfillment of a promise to Memphians, Marshall said.

“Very few people have received access to the top of the Pyramid,” Marshall said. “We had this notion of an inclinator climbing up the sides of the (building). There is evidently no longer a company in this country that makes an inclincator that can climb up the side of a building.”

So, they built an elevator, the largest free-standing elevator in North America. The 28-story glass shaft of the elevator is massive, jutting up from the middle of the Pyramid straight to the apex. Getting to top now is 432 steps, Marshall said. Riding the elevator to the top when it’s finished will be “one heck of a ride,” Marshall said.

The apex space will give visitors a 360-degree view of Downtown Memphis and the Mississippi River. The south and west sides of the apex will have outdoor walkways, or “porches.” These spaces will have glass bottoms and glass railings for what is expected to be “incredible” views.

At night, the apex will be lit. Marshall said it will glow at night “almost like a diamond shard” that the space will “truly transform the skyline of the city Memphis.”

The south side of the Pyramid will feature the Bass Pro Shops logo and the logo of Ducks Unlimited. 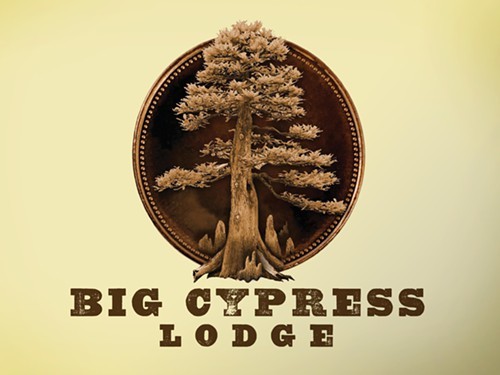 HOTEL
The Bass Pro Shops at the Pyramid will also be home to Big Cypress Lodge, which will offer 100 “rustic” and “uniquely appointed” rooms.

Room rates start at $259 per night. Reservations for the Big Cypress Lodge can be made starting Monday, Nov. 17 by calling 1-800-BCLODGE.

The Big Cypress Lodge will be the second Bass Pro hotel. The first is the Big Cedar Lodge, an 800-acre resort located next to Table Rock Lake close to Branson, Mo. The Big Cedar Lodge now hosts about 1 million guests per year.

DUCKS UNLIMITED WATERFOWLING HERITAGE CENTER
The Memphis-based Ducks Unlimited will have a new 4,600 square-foot exhibit space inside the Pyramid meant to educate visitors about conservation efforts.

“We want to have people understand what hunters and conservationists have done for wetlands and rivers along the way,” said Ducks Unlimited CEO Dale Hall.

The center will feature a mock-up duck lodge where visitors can “relax by the fireplace and watch videos and a look at artwork and taxidermy and admire waterfowl collectibles such as guns, decoys, and duck calls.”

“Culturally hunters have always taught through the culture of hunting, one-on-one,” Hall said thursday. “(Hunters take) someone to a duck club, take them out into a blind, and take them out somewhere to help teach them about conservation. That’s how each of us learn.”

The center will teach visitors about the organization’s history, Hall said, noting it has conserved 6 million acres of wetlands and raised $6 billion.