Construction Is Underway For Airport Modernization

November 20, 2014
2 comments
Demolition of the south end of Concourse A at Memphis International Airport is underway. The Memphis-Shelby County Airport Authority's (MSCAA) modernization plan involves removing the south ends of the A and C concourses to allow planes to better access to all the gates on Concourse B. All airline operations are being consolidated into the B concourse.

With the airport's current design, planes only have one-way access to and from the courtyard areas of the B concourse because the south ends of the A and C concourses are in the way. This wasn't a problem when Delta Airlines had their hub at the airport because they could better coordinate when their own planes were coming or going. Now with multiple airlines taking up more space at Memphis International Airport, it's harder to coordinate entry and exit traffic. Demolishing the south ends of the A and C concourses will create a larger taxiway, allowing planes to come and go at the same time.

The rest of the A and C concourses will be left intact, and only the southern ends are being removed. The MSCAA will retain 20 gates for future expansion.

The current phase of construction on Concourse A should be completed by early December 2015. While construction is ongoing, gates 1, 3, 5, 7, and 27 to 41 on the west side of the B concourse will be closed. Demolition to remove Concourse C's southern end should begin in late summer 2015. By late 2015, all airlines and concessions are expected to be operating in the B concourse.

The $114 million concourse modernization plan, which will take between and five and seven years to complete, also includes the addition of moving walkways, expansion of boarding areas and added passenger seating, raised ceilings, and increased natural lighting. 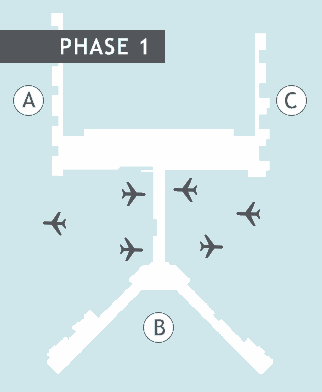