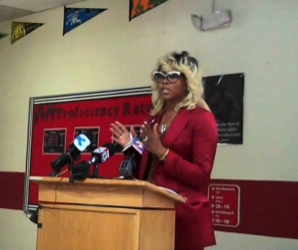 Earlier this year, Shelby County Schools (SCS) unveiled an ambitious goal to get 80 percent of high school seniors prepared to walk into a college classroom or enter the workforce by 2025, 90 percent to graduate on time, and 100 percent to seek a post-secondary opportunity, whether that's a university or a technical school.

On Thursday night at the Teaching and Learning Academy on Union, SCS leaders met with the community to discuss the details of what's being called the 80/90/100 plan. During a question-and-answer period, several teachers and parents spoke up to commend SCS on the plan, but they all agreed that teachers will need more support to make the plan work.

Third-grade teacher Trey Willis said he often feels overwhelmed by the achievement gap he sees in some students who enter his classroom without sufficient literacy skills. He said kids are placed into reading groups that are too large and do not allow enough one-on-one time, and he said he could be helped if trained interventionists in literacy and reading comprehension could assist him in working with troubled students.

Dr. Sharon Griffin, the regional superintendent of SCS' I-Zone (the segment of schools in the bottom five percent), said the 80/90/100 plan will do just that. She said interventionists already work with kids in I-Zone schools and that this new initiative would spread that across the district.

White Station High parent Marie Dowling said she often hears similar concerns from teachers who feel overwhelmed. She said she worries that they will become burned out and walk away from teaching.

"It sounds like it will take a culture shift in the entire system [to make this work]," Dowling said.

Griffin said that 80/90/100 plan administrators surveyed teachers and principals earlier this year, and 51 percent said that empowering educators should be the district's number-one priority if they actually hope to achieve the plan's goal.

She said much attention would be turned to literacy in grades K-2 and that the district would begin moving their strongest teachers into those grades.

"Traditionally, we put the strongest teachers in grades 3-5 because because the assessments start in the third grade. But we want to make sure literacy is in line with Tennessee standards early on," Griffin said.

The plan also involves working to improve student attendance and reducing course failures. Griffin said the district would also work to address any social issues children may be facing outside of school, and they want to improve the overall culture of the schools.

"We want school to be a joyous place," Griffin said.