South Side Middle Parents Speak Out at School Consolidation Meeting 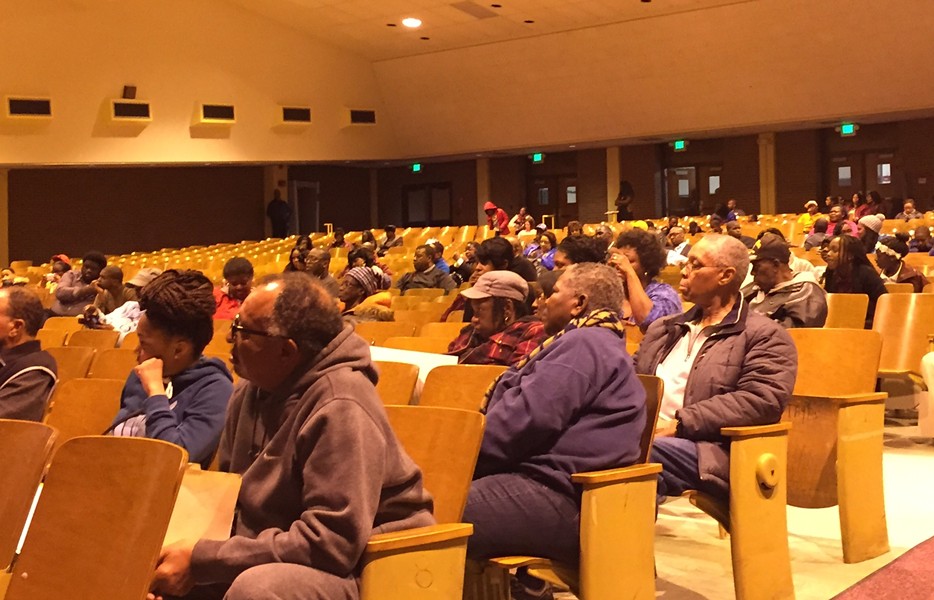 In the 2015-2016 school year, South Side Middle School students may be bussed to Riverview Middle, leaving another massive, empty school building in the heart of a South Memphis neighborhood. Just down the street from South Side sits the vacant Longview Middle School, which Memphis City Schools closed in 2007.

The reason for the proposed consolidation with Riverview is South Side's low academic achievement. South Side falls in the bottom five percent of county schools, which means it's susceptible for state Achievement School District (ASD) takeover. To prevent such a takeover in the future, the Shelby County Schools (SCS) administration is recommending moving the students at South Side into Riverview, an SCS iZone school.

"South Side is on the ASD short list. And South Side will have to be in the iZone or the ASD. Those are the only options we have on the table. It just makes more sense to educate these children through the iZone," said SCS Superintendent Dorsey Hopson.

When the ASD selects a school, they send in a charter school organization to run the facility with the goal of moving the school from the bottom five percent to the top 25 percent. When the ASD comes in, the school falls out of the SCS district.  And because of state law, when the ASD wants a school on the SCS priority list, there's nothing SCS can do to stop them from taking it over.

A couple years ago, SCS launched it's own program, iZone, to help move some of those priority schools into higher achievement status so they wouldn't be susceptible to state takeover. The iZone schools only hire teachers with Teacher Effectiveness Measure scores of three or higher, and the principals have more autonomy, including the ability to hire all of the school's staff. Since the iZone's start in 2012, all 13 iZone schools have shown improvement, and six of them have already moved from the bottom five percent to the top 25 percent.

But at a public meeting at South Side on Monday night, parents and students of South Side spoke out against the plan to merge with Riverview. Many spoke about their fears of moving children into what they say is gang territory around Riverview, home of the Rollin 90s gang. Several students even told the SCS board members in attendance that they were worried about being mugged or even raped while walking from their homes near South Side to the Riverview neighborhood.

Others spoke about how closing the school could destroy the community and devalue surrounding homes. SCS has not released any plans yet for what would happen to the building if the school is closed.

More than a couple times, SCS board member Teresa Jones admonished speakers for going over their two-minute time limit at the microphone. And at one point, board members cut off a young girl who was reading a prepared statement about why she wanted to save her school. That brought angry cries from the audience, and from that point on, the meeting remained contentious, with many speakers refusing to stop talking into the microphone after their two-minute warning.

The consolidation proposal has not yet been approved by the SCS board. They'll also be considering consolidating Lincoln Elementary with A.B. Hill Elementary. There is a community meeting at Lincoln (1566 S. Orleans) on Thursday, February 12th at 6 p.m.