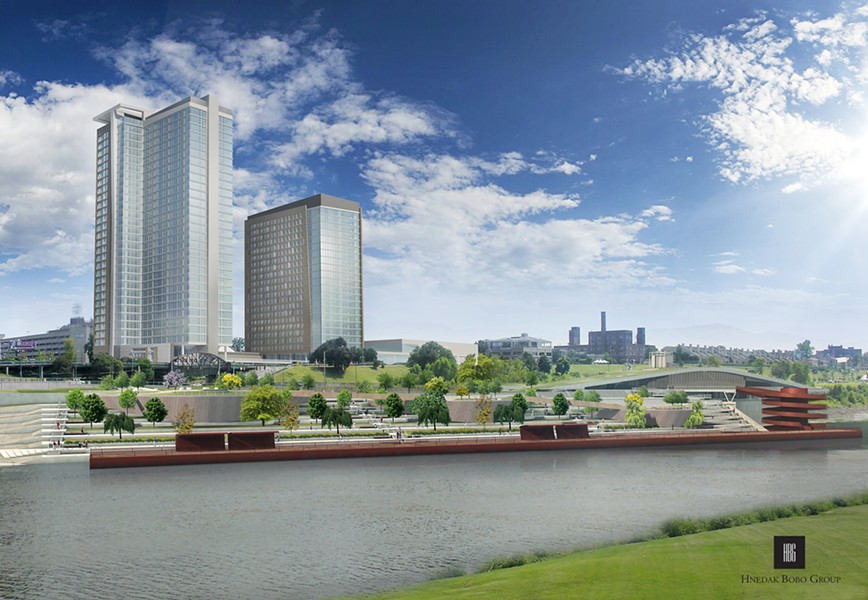 Construction could start on One Beale as soon as the beginning of next year and open about 30 months after that, development officials told members of the Downtown Memphis Commission Tuesday morning.

One Beale is a proposed $150 million development on the corner of Beale Street and Riverside Drive. The plan was revealed in the media last week.

The development also has an office and conference building and an 800-space parking garage. Restaurants and bars will be located inside the apartment and hotel towers. Retail space will be available at sites over the entire campus.

If built, the towers will transform the Memphis skyline, according to Chase Carlilse, director of real estate and development for Carlisle Corp., the company behind One Beale.

“We are all aware that we’re at the mouth of the Mississippi River and it’s one of our most attractive features,” Carlisle said. “(Memphis Mayor A C Wharton) has been pretty public with his desire to see us connecting the river to the rest of our city, not just Beale Street.

“Today our site would be the missing front teeth of our city. We want to take the opportunity to fill in those
pearly whites.”

Carlisle said construction on the $150 million project could begin as early as the first three months of 2016 and would take about 24 months-30 months to build. That would push a grand opening of One Beale to sometime in 2018.

The company is in talks with an “internationally branded flag hotel” to occupy the south tower, Carlisle said. But the deal isn’t done and he did not want to give the name of the hotel company.

The presentation to the Downtown Memphis Commission’s Center City Revenue Finance Corporation (CCRFC) was for information purposes only. Carlisle said he wanted to begin to introduce the project around town and to get public feedback on it, noting he will soon begin meetings with Downtown neighborhood groups.

However, Carlisle Corp. will likely come back to the Downtown Memphis Commission (DMC) for public support of the project. The DMC website said it like this:

“As design plans, development costs and further financial analyses are being finalized, the development team and DMC staff will continue working together to determine the terms of a proposed private-public partnership necessary to make this a financially viable project,” the DMC website said. “The developer and DMC staff expect to present such terms to the CCRFC at a later date.”

The proposal sparked only a few questions about One Beale Tuesday but it certainly seemed to impress CCRFC chairman Luke Yancy.

“That’s awesome,” Yancy said at the end of Carlisle’s presentation. “I’m at a loss for words.”

These are renderings of the One Beale project proposed for the corner of Beale Street and Riverside Drive.