March 23, 2015
comment
Four Shelby County Corrections Deputies are facing up to 20 years in federal prison for attempting to smuggle OxyContin into the Shelby County Jail at 201 Poplar. 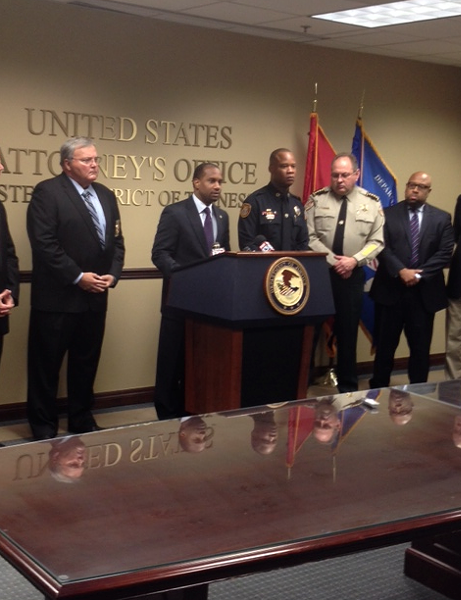 A press conference was held at the U.S. Attorney’s office Monday regarding the federal indictments. U.S. Attorney for the Western District of Tennessee Edward Stanton, Shelby County Sheriff Bill Oldham, Memphis Police Director Toney Armstrong, and FBI Special Agent in Charge Todd McCall were all in attendance to discuss the jailers' illicit endeavors.

During the press conference, it was disclosed that an undercover operation was arranged by the FBI's Tarnished Badge Task Force in July 2014. The effort involved "cooperating" inmates who requested for the defendants to smuggle OxyContin, a narcotic pain reliever, in exchange for cash payments from a third party outside of the jail.

Cooperators would give the defendants the name of an individual, who they would meet up with at various locations throughout Memphis. The individual would provide presumed OxyContin pills (actually placebos) and cash to the defendants. Subsequently, the prescription pills would be smuggled into the county jail and provided to the cooperating inmates.

After transactions were completed, the cooperators would turn the pills over to law enforcement.

When asked if there were potentially more jailers smuggling contraband for inmates, Shelby County Sheriff Oldham said, 'You always have that possibility.'

"One of the things we’re going to continue to do is be as vigilant as we can, using all of the resources that we have to prevent that from occurring," Oldham said. "And when it does occur, to make sure that those individuals are prosecuted to the fullest extent of the law."

U.S. Attorney Stanton said the investigation is another example of the uptick law enforcement has seen with the demand for and addiction of prescription drugs.

If convicted, all four defendants face up to 20 years in federal prison without the possibility of parole.

The case was investigated by the Tarnished Badge Task Force, which is comprised of investigators from the Shelby County Sheriff’s Office, Memphis Police Department and Federal Bureau of Investigation.