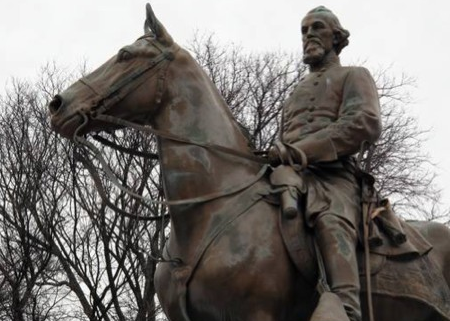 The Memphis City Council Parks Committee on Tuesday approved an ordinance allowing the city to move the Nathan Bedford Forrest statue out of Health Sciences Park, and they also approved a resolution to move the remains of Forrest and his wife, which are buried at the park.

The ordinance and resolution came on the heels of a national movement to remove symbols of the Confederacy after a reported white supremacist, Dylann Roof, allegedly murdered nine church members at the historically black Emanuel AME Church in June.

The ordinance to transfer ownership of the statue and to remove and relocate it will be required to pass three readings of the full council before it would go into effect. The resolution to remove the Confederate general's remains only requires one reading, and the council agreed this morning to move it to tonight's full council agenda.

But even if that resolution passes, state law would require that the city bring a lawsuit in Shelby County Chancery Court to have the remains removed and relocated. State law requires a Chancery Court decision for the removal and reburial of remains, and any remaining relatives of the deceased must be made a party in the lawsuit.

City Councilmember Janis Fullilove questioned whether the decision to move the statue and remains were related to recent news of the University of Tennessee's planned expansion. Fullilove said, if UT wanted to purchase the Health Sciences Park land, there could be an ulterior motive for moving the statue. But Myron Lowery, who said he proposed the move before Mayor A C Wharton held a press conference about it two weeks ago, said the move was discussed before he learned of UT's expansion plans.

"And there is no proposal to the city from UT to deal with that land," Lowery said.

Edmund Ford Jr. said he'd talked to a man who was interested in having the statue moved to Shiloh Military Park in Tennessee. And Lowery said he'd heard from others with interest in the statue. An opinion on the matter written by council attorney Allan Wade said Elmwood Cemetery also had room for the statue. But there's been no decision yet on where the statue would go.

As for the remains, Wade's opinion highlights the fact that Forrest's will, which was probated in Shelby County on December 17, 1877, mentions his request to be buried at Elmwood "among the Confederate dead." Forrest and his wife were originally buried at Elmwood, but their remains were moved to Health Sciences Park (formerly Forrest Park) on November 11, 1904.

The statue was dedicated there on May 18, 1905 by the Forrest Monument Association. The association paid for the statue with private donations, including the donated salaries of the Memphis City Councilmembers who held office in 1903. On March 25, 1903, the association had petitioned the council to authorize a special tax levy for the statue. The council objected because of the need for funding for streets, sewers, and bridges, but the since the members supported the idea for the statue, they agreed to donate that day's salaries to the cause.

At today's council committee meeting, Lee Millar of the Sons of Confederate Veterans expressed disapproval of the proposed move of the statue and the remains.

"We are steadfastly opposed to moving the statue of one of our American heroes," Millar said. "And it would be an abhorrent thing to dig up the graves in Forrest Park."