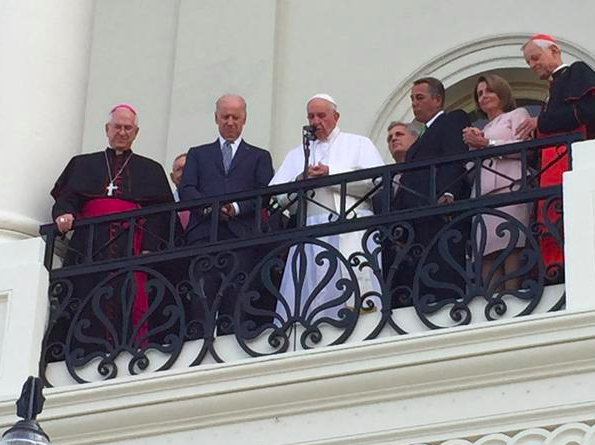 The pontiff gave a speech to Congress this morning (the first time a pope has ever addressed that body) on the West Lawn of the U.S. Capitol. Some Memphians were on hand for the historic occasion thanks to Memphis Congressman Steve Cohen.

How did Cohen choose who got to see HIs Holiness? A lottery, of course.

“Pope Francis is an inspiring and uniting figure whose work has helped countless people around the world,” Cohen said in a statement. “I was pleased to provide these Memphians with the chance to see His Holiness in person as he became the first Pope in history to address the U.S. Congress. I hope everyone enjoyed the opportunity to be part of this historic day in our nation’s history.”

Congress members were given a small number of tickets to the event and Cohen offered them up in a lottery. (Cohen was also the main backer of Tennessee's state lottery when he was a state Senator.) Those winners paid their own way to Washington and paid for their own accommodations, Cohen said.

Tennessee Senator Lamar Alexander also weighed in on the Pope's visit with this statement:

“Pope Francis lives his life in a way that provides an extraordinary example of serving others. It has been an honor to help host his visit and to hear him.”

"It was an honor to welcome His Holiness Pope Francis to our nation’s capital today and hear his historic address to Congress. His address was one of hope and unity, and I was particularly pleased to hear his message about the fight to eliminate modern slavery.

"As Pope Francis conveyed, ending modern slavery will not come easy. It will require cooperation from people of all faiths, backgrounds, and nationality. But together, we can end it. I remain committed to efforts to fighting slavery and human trafficking, which is a heartbreaking reality for the more than 27 million people enslaved today in more than 167 countries, including our own.”