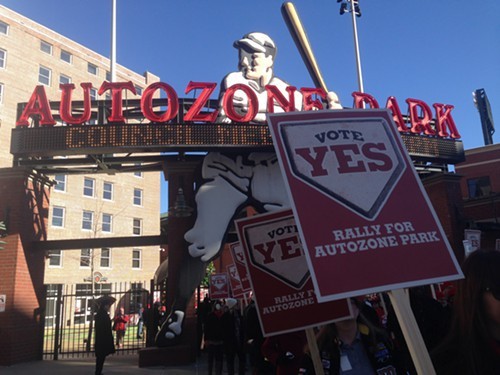 The St. Louis Cardinals intend to sell the Memphis Redbirds, according to a statement issued Monday.

The Cardinals organization said it has reached an agreement to sell a majority interest in the Redbirds to Peter B. Fruend, owner of Trinity Baseball Holdings. The financial terms of the deal were not disclosed but the statement claims the deal should be closed by April 1.

In 2014, the city of Memphis purchased AutoZone Park, the Downtown home of the Memphis Redbirds, for about $24.5 million. Part of that deal was that the Cardinals bought the Redbirds and agreed to manage the team and the park.

That contract runs through 2030 with two, five-year options to renew it. A spokesman in Memphis Mayor Jm Strickland’s office said “we don’t anticipate any changes to our current contract” with the Redbirds.

“I met with Peter and [Craig Unger, the General Manager of the Memphis Redbirds] this morning and they stressed to me that they are committed to Memphis,” Strickland said in a statement. “We welcome Peter to our city and look forward to continued success with him as majority owner and Craig as president and general manager.”

As for the Cardinals, here’s what its top official said about the deal:

"While we were not actively looking to sell a stake in the team, after meeting Peter we immediately knew that partnering with him would strengthen the Memphis Redbirds and be a win for everyone involved," Bill DeWitt Jr., chairman and CEO of the St. Louis Cardinals said in a statement. "To have someone of Peter's caliber and track record of success in minor league baseball willing to make this investment further solidifies the revitalization of this flagship franchise and baseball in Memphis."

Freund said he “fell in love with the city of Memphis and the Redbirds the moment I stepped foot in AutoZone Park and met the leadership team.”

Freund is a minority owner of the New York Yankees with has nearly a decade of experience in minor league baseball ownership and operations, according to a statement.