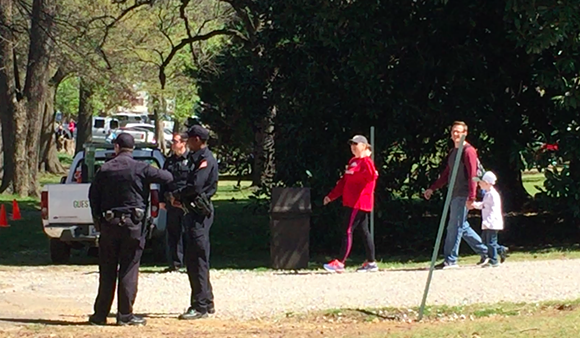 The city’s law enforcement and public safety presence during this weekend’s protests at the Overton Park Greensward cost just shy of $38,000, according to figures from Memphis Mayor Jim Strickland’s office.

Here’s the breakdown on the cost:

• On Saturday, April 2, 88 staffers were dedicated to the detail.

• The total cost of overtime for employees on the detail those two days is estimated to be $24,340.25.

• The total cost for regular-duty employees on the detail those two days is estimated to be $13,514.74. (Regular-duty is defined as officers who were already scheduled to work that day and were assigned to the Overton Park detail.)

• Staffers on the detail were not solely located at Overton Park. Some staffers were assigned to the neighborhood, some were on dispatch, and more. The staffing number is the entire detail.

• On Sunday, two MAS personnel were involved. Costs for those employees are included in the totals above.

Memphis Police Department (MPD) interim director Michale Rallings said more officers were needed in Overton Park this past weekend after “the prior weekend's events involving both protesters and patrons.”

“During the prior weekend's protest, numerous issues were identified,” Rallings said in a Monday-evening statement. “Major traffic congestion was experienced by zoo patrons, verbal threats were voiced by protesters and patrons, a small contingent of protesters were lying down on the Greensward blocking zoo patrons who were directed to park on the Greensward area, and threats of more aggressive behavior in the future were stated to officers.

“We could not ignore these actions. It is our responsibility to maintain peace. We must make sure that all parties are protected and that no civil unrest is experienced. Officers of the Memphis Police Department did just that.”

Here’s his statement on the cost of the police presence:

“I wish we didn’t have to spend any money on police details for a Saturday in the park,” Strickland said. “However, it is MPD’s job to provide for public safety for all, and I back their decisions.”

“Mediation is a deliberate process meant to deliver a thoughtful resolution, which means its conclusions aren’t always reached as quickly as we all would want them to be reached,” Strickland said. “I urge patience as we continue to work toward a solution.”

Some on the protest side of the fence thought the show of force was excessive.

Park supporter Alisha Wallheimer said, “of all the places I have ever felt unsafe in Memphis or the surrounding areas, Overton Park has never been one, nor have I ever seen such a police force.”