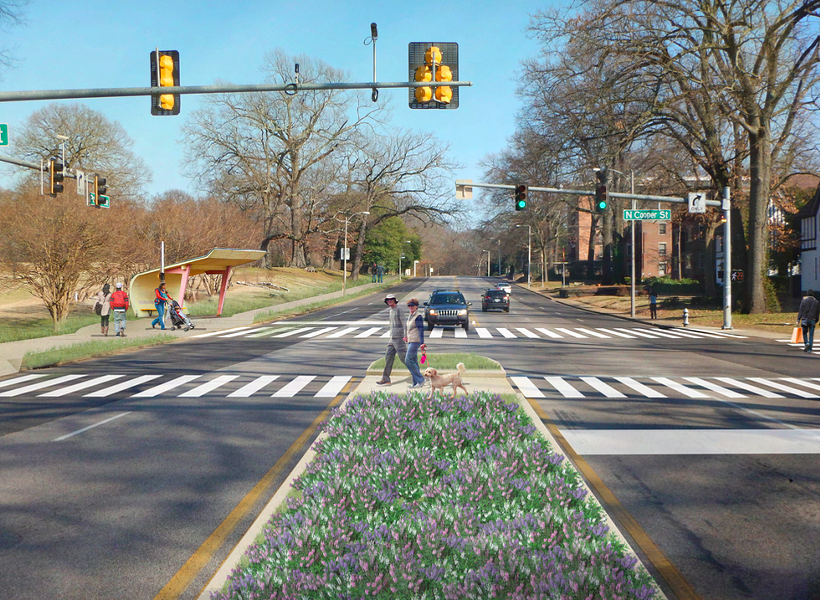 The Overton Park Conservancy (OPC) has released its parking and traffic study, which includes suggestions like creating a parking app for smartphones, adding more parking along North Parkway, and, perhaps a $7.8 million parking garage at Prentiss Place.

The months-long study was conducted by Looney Ricks Kiss, Alta Planning + Design, and Kimley-Horn and Associates. The groups met with park stakeholders and also sought input from the public at two meetings. All of the work has culminated in a set of recommendations for improvements to the park, which would come in three phases.

“This report brings together the ideas of Overton Park’s cultural institutions and its users, along with a thorough assessment of how to gradually eliminate the conflict between park use and demand for parking,” reads an OPC statements on its website.

Recommendations in the first phase are considered “low-hanging fruit,” solutions that are considered easier and cheaper to execute. These would be completed in 2016 and include creating 350 new parking spaces by reconfiguring roadways on North Parkway (for 200 spaces) and Galloway (100 spots) and reconfiguring the Memphis Zoo’s existing surface lot (for 50 new spaces).

Phase 1 recommendations also suggest numerous improvements to make the park more accessible by cyclists and pedestrians. The study recommends better communications about parking with park visitors through the web and, perhaps, on an Overton Park smartphone app.

Also, the study suggests creating opportunities for public transit through the park or, maybe, a circulator program with buses or trams running to multiple spots throughout the park.

Another recommendation would mandate that any park stakeholder, like the Memphis Zoo or the Brooks Museum of Art, that plans an expansion to also submit a plan for additional parking. The zoo has faced much criticism on this point. Zoo leaders have said that its new Zambezi River Hippo Camp will bring 15 percent more visitors to the zoo. However, leaders did not plan for more parking for those extra visitors.

Implementation on the second phase of recommendations would begin in 2017 and would add 450 new spots with a further reconfiguration of the zoo lot and more surface lots in the park. A vendor would be chosen to implement the study’s plan for a circulator route through the zoo. Also, $750,000 worth of design work would begin on new parking garage that would be built on the existing surface lot on Prentiss Place.

The garage would only be built if needed, according to the study. If it is, construction would get underway in 2018. The facility would house 300 additional spaces at a cost of $7.8 million.