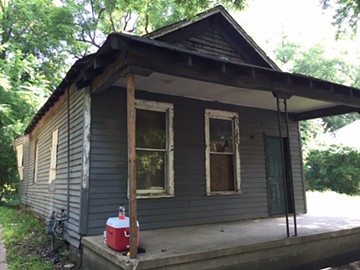 The LeMoyne-Owen College Community Development Corporation (LOCCDC) has just over 30 days to make progress on its plan to salvage the blighted birthplace of Aretha Franklin. In court on Thursday morning, Shelby County Environmental Court Judge Larry Potter issued a stay on his order to demolish the home.

Earlier this month, Potter put the home at 406 Lucy in South Memphis into a city receivership and ordered the home to be demolished. It was first declared a public nuisance in October 2012 due to its blighted state. The entire back half of the home was nearly destroyed by fire years ago, and one side of the roof over the porch was sagging. South Memphis Renewal CDC was appointed a receiver for the property about a year ago, and Jeffrey Higgs of the LOCCDC informed the Environmental Court at that time that his group would fund-raise and relocate the home elsewhere in Soulsville. But little physical progress had been made.

However, Memphis Heritage volunteers showed up a couple weeks ago to board up the home. Its owner, Vera House, had her son remove the partially collapsed back portion of the home last week.

Because those steps had been taken to secure the home, Potter told Higgs that he could have 30 days to prove that his plan to save the home was actually underway. Higgs told Potter that both Mayors Jim Strickland and Mark Luttrell had stepped in to help put him in touch with Franklin, who he said may put some funding toward saving the home.

"Ms. Franklin has talked to me personally and expressed an interest in saving the home," Higgs told Potter, after first admitting that he wasn't comfortable discussing that deal in court.

Higgs later told Potter that Franklin had said she'd like to see the home, where she was born and lived until about age 2, salvaged and placed in a museum. Higgs also told the court that he'd had some interest from local business owners who would be willing contribute money to saving the home.

After looking at the most recent photographs of the home, Potter commended the efforts to board the home and demolish the back portion. But he instructed Higgs that he must remove debris from the property and cut the grass.

After court ended, Higgs said his next step will be approaching the partners who have expressed interest in saving the home to let them know it's "time to put up or be quiet."

House and her grandson Christopher Dean were present in court on Thursday morning. Afterward, Dean said he hoped Higgs would come through with his plan, but he said Potter "should have given him five days instead of 30," adding that Higgs' group had had plenty of time before now to make progress on the house. Dean said, should Higgs' efforts fail, he and his family have a back-up plan for saving the home.

As for Potter, he admitted that his demolition order on the home earlier this month wasn't "one of his golden moments," but he said the house was in such bad shape for so long that he was left without a choice.

"The moral to this story is that you may work on a case for four years, but as soon as you order the house to be demolished, by golly, it goes national," Potter said. "So maybe we should just order everything [blighted to be] torn down."

Higgs must appear before the court to report on progress on August 11th.