Memphis Mayor Jim Strickland rolled out a plan Friday that he says will permanently end parking on the Overton Park Greensward.

The mayor's proposal comes after the negation deadline passed between the Memphis Zoo and the Overton Park Conservancy (OPC) Thursday. The mayor asked the organizations to enter into mediation in January after both had filed separate lawsuits claiming control of the Greensward.

Even though mediation did not yield an agreement, Strickland said his plan is a by-product of the mediation talks.

The final decision on the plan, though, will fall to the Memphis City Council, which meets Tuesday. However, council chairman Kemp Conrad, who said he supports the mayor's plan, said he will ask his fellow council members to delay the vote for two weeks. 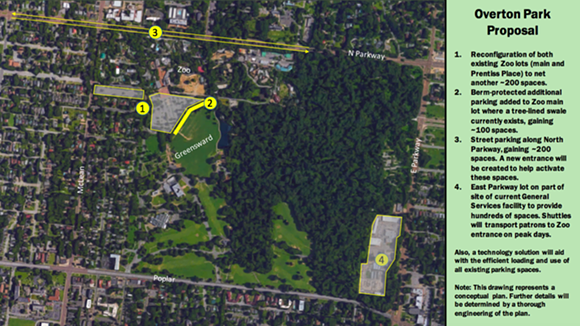 OvertonPark.pdf
Here's what he proposed:

• Reconfiguring the Zoo’s existing lots (main and Prentiss Place) for a net gain of approximately
200 spots.

• Adding approximately 100 spaces by constructing permanent parking on the southeast side of the
Zoo’s main lot, where a tree-lined swale exists to separate it from the grassy, usable Greensward area.

A berm will be constructed to obscure the view of cars from the Greensward, and new trees will be planted to replace ones lost. The berm solution was proposed in this year’s parking study and is supported by the Overton Park Conservancy.

• Utilizing approximately 200 spaces on North Parkway, which will be activated by a new entrance on the north side of the Zoo. The North Parkway parking will include a designated waiting area for buses, thus freeing up spaces in the Prentiss Place lot.

• Building a new lot on the General Services area on the southeast corner of the park that will provide hundreds of spaces. It will be serviced by buses that will run on peak days and will transport guests to the new Zoo entrance via public roadways outside the park.

It will also provide parking for all other park entities, especially the park’s East Parkway-facing facilities and the Old Forest. General Services’ departure from that area allows the opportunity not only to add parking but also for additional amenities and greenspace to be added to the park.

• Adapting a technology solution to aid with the efficient loading and use of all existing parking space.

“All of the parties participated in good faith in the mediation, and I appreciate their efforts,” Mayor Strickland wrote in an email to constituents Friday. "There was no easy solution to this complicated issue.

"The proposal I am putting forth is the best possible result, given the constraints with which we are dealing.”

There was no easy solution to this complicated issue. — Mayor Jim Strickland tweet this
Those constraints, he said, were the cost of building a parking garage, which he said was about $14 million. Also, he said the citizens in the nearby Galloway neighborhood voted against reg parking structure.

Other constraints included opposition to parking on the Greensward, opposition to using trams through the Old Forest, and oppositions to using buses to ferry zoo visitors from the General Services lot on a daily basis.

Council Vote is Next

The mayor's plan must be approved by the Memphis City Council, which has an ordinance prepared for a third (and final) vote on the matter. The next council meeting is Tuesday, July 7 but council chairman Conrad said he hopes to delay the measure by two weeks.

"“This issue requires ample time for the public to review it and offer input, so I will strongly recommend to my colleagues to delay the final vote on the ordinance that considers the plan until July 19," Conrad said. "I support this plan.”

OPC and the Zoo react

Richard Smith, a FedEx executive and zoo board member, said Strickland made a tough decision.

"Having been told I’m simultaneously 'selling out' and 'ruining' the zoo by one side, and that I’m 'destroying' Overton Park by the other, I do not envy the mayor on this day," Smith said. "He’s having to step up and make a call on behalf of the citizens of Memphis, who own both amenities, and is trying to balance the interests of all constituencies in maintaining access to valuable city resources.”

I do not envy the mayor on this day. — Richard Smith tweet this
OPC executive director Tina Sullivan her organization supports the mayor's plan.

"With any compromise, there will be some who are not entirely satisfied," Sullivan said. "But we look forward to this being a permanent end to the Greensward used as overflow parking."

Sullivan said she would have to consult with her attorney before answering questions about the OPC's still pending in Shelby County Chancery Court. However, she said if the mayor's plan is approved, she said the lawsuit could become unnecessary.

OPC likes the berm that will surround the Greensward. Here's how OPC described its affect on park visitors in a blog post Friday:

"For the first time in decades, people enjoying the Greensward won’t even be able to see the zoo parking lot. They’ll just see a park, as George Kessler originally intended."

For the first time in decades, people enjoying the Greensward won’t even be able to see the zoo parking lot. They’ll just see a park, as George Kessler originally intended. — Overton Park Conservancy tweet this

After the deadline passed, and before Strickland’s announcement, Memphians took to Facebook on groups like The Fringe Element, Stop Hurting Overton Park, Get Off Our Lawn, and more to express frustration with the process and nervous anxiety for the future.

One Facebook poster said the mediation process was a farce. One person claimed already that Mayor Strickland was going to “pass the buck” on the decision to the city council on Tuesday and that the zoo were going to bus people in to protest the vote. It was also noted that the council would “slam us” with Tuesday’s vote and many called for Greensward supporters to pack the council chamber.

Some pointed to the fact that the Levitt Shell’s “Patriotic Pops” concert Thursday night drew thousands, though none of them parked on the Greensward.

Fergus Nolan, one of the two people arrested last month during a Greensward protest, said it was time to shut down the zoo and “free the animals.”

A new Facebook group, called Pardon Imprisoned Animals, called for the end of “the imprisonment of animals within Memphis, specifically within the Memphis Zoo, and circuses.”

“Zoos, circuses, and other institutions that profit off of captive animals do not have those animals' best interests at heart,” reads the group description on Facebook.

Saturday will bring activity and likely protests (in one form or another) to the Greensward. Citizens to Protect Overton Park will host a Greensward Play Date from 10 a.m. to 2 p.m. The Facebook invitation asks “do you believe in a better and brighter future for our great city of Memphis?”

“We don't know whether the June 30 resolution of the secret city/zoo/OPC mediation will embrace these ideals or continue to harm our park,” reads the invitation. “Either way, we are ready to joyfully celebrate and/or peacefully protest on the People’s Greensward.”

On The Fringe Element page, Nolan suggested “direct action” on the Greensward Saturday and gave tips to anyone who may be arrested.