Scoring only slightly lower than its neighboring cities to the east, Memphis received a 53 out of 100 rating. Knoxville received a score of 55, while Nashville, at number one, scored at 60. The average score for cities in Tennessee was 33 out of 100 points, slipping below the nationwide mean of 55.

Though the state has a way's to go in making substantial changes for the LGBT community, Chris Sanders, executive director of The Tennessee Equality Project, said Tennessee is making progress.

“Cities in Tennessee present real opportunities to advance equality in meaningful ways," Sanders said. "When we held Murfreesboro's first Pride celebration this year, we saw a growing interest among allies to work with us, even in conservative areas of the state. The challenges remain considerable, but a growing number of Tennesseans are tired of discrimination.” 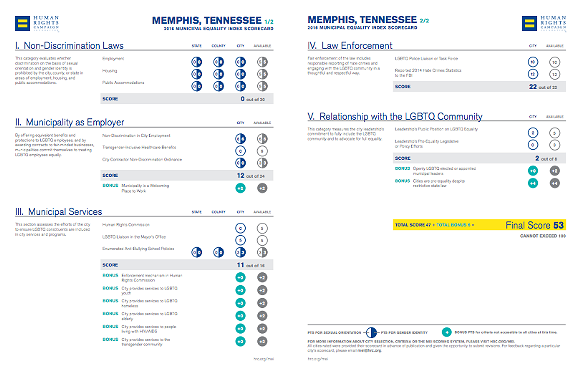 "The challenges remain considerable, but a growing number of Tennesseans are tired of discrimination.”— Chris Sanders, executive director of The Tennessee Equality Project tweet this
HRC, in partnership with Equality Federation Institute, assessed 506 U.S. cities and scored them on a scale of zero to 100 based on 44 criteria that fall across five categories. Those include non-discrimination laws, municipal employment policies including transgender-inclusive insurance coverage and non-discrimination requirements for contractors, inclusiveness of city services, law enforcement including hate crimes reporting, and municipal leadership on matters of equality.

"Despite another year of legislative attacks on LGBTQ equality, we are not merely holding our ground — we also continue to make significant gains across the country,” said Rebecca Isaacs, executive director of the Equality Federation Institute. “The opportunity for further progress is huge, and we are proud to partner with HRC on the Municipal Equality Index, a powerful roadmap for elected officials and community advocates who want to continue down the path to full equality.”

On non-discrimination laws, a category evaluating whether discrimination on the basis of sexual orientation and gender identity is prohibited by the city, county, or state in areas of employment, housing, and public accommodations, Memphis received a score of zero out of 30. Inclusive housing for members of the LGBT community, specifically transgender men and women, has been a point of contention in the city. Last month, homeless advocates marched to the steps of the Memphis Housing Authority to protest and demand an LGBT shelter. OUTMemphis hopes to curb this issue with a planned emergency shelter.

"The opportunity for further progress is huge."— Rebecca Isaacs, executive director of the Equality Federation Institute tweet this
While city employment scored a six out of six for non-discrimination, and while the city received a five out of five score for having an LGBT liaison in Mayor Jim Strickland's office, Memphis offers no healthcare benefits for transgender people. It's an unfortunate slip in a year where transgender equality has flourished in cities across the country, HRC reported. Employees from 86 municipalities have access to transgender-inclusive healthcare benefits this year — up from 66 in 2015 and just five in 2012.

“This year, dozens of cities across the nation showed they are willing to stand up for LGBTQ people in their communities even when some state governments are not,” said HRC President Chad Griffin. “This builds on a trend we have long observed: that local governments are at the forefront of our fight for equality. Unfortunately, our opponents have witnessed this progress too, and in recent years, anti-LGBTQ lawmakers have pushed spiteful legislation aimed at pre-empting local protections. That’s why it’s so important that we continue to not only fight for equality at the state and local levels, but to enact comprehensive federal protections for LGBTQ people under the Equality Act.”