After Years of Decay, Clayborn Temple is Alive Once Again 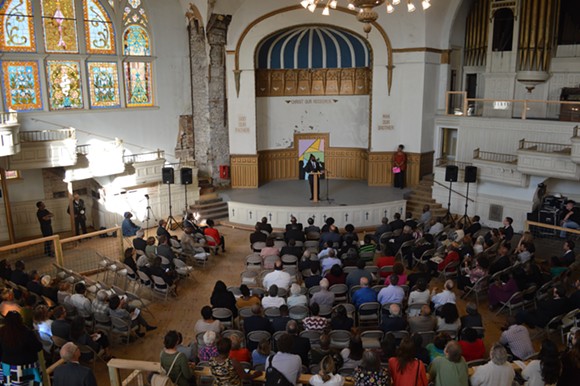 Today, more than 150 people filled into the sanctuary of the historic Clayborn Temple to witness new life breathed back into a resurrected stronghold of the Civil Rights Movement.

Standing in the south shadow of the FedEx Forum, Clayborn Temple, once a buzzing hive for both congregation members and civil rights leaders alike, has been boarded up and empty since 1999, after years of downtown development had gradually forced congregation members out of the neighborhood.

In October of 2015, nonprofit Neighborhood Preservation Ins. bought the deed to Clayborn in hopes to embark on a multi-million dollar renovation project. Under the leadership of Rob Thompson and Frank Smith, media began to tour the nearly forgotten landmark last week. Today, the church doors were opened to the public, as the team spearheading the project invited guests to come in and discuss what they thought the new future of Clayborn should include.

Tentative plans for the church will have it alive and thriving once more in time for the 50th anniversary of Dr. Martin Luther King Jr.'s death, in April 2018. Continued public input will be sought by leaders of the project.