Memphis Police Invites Federal Review of Their Policies and Practices 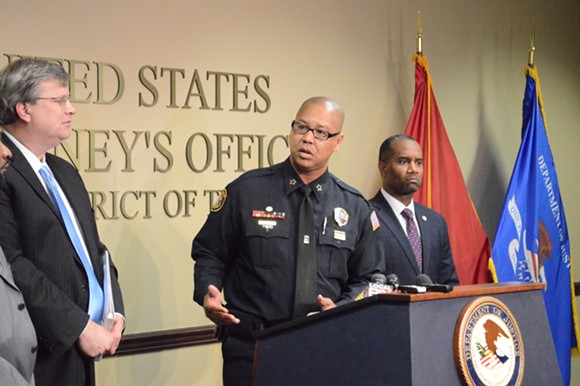 It turns out that the Department of Justice showing up at your door can be a good thing, you just have to send out the invitation in the first place.

"This is a collaboration, and it's important to know that," stressed Wray, adding that the COPS program is an independent, objective assessment that the MPD entered into willingly.

"The purpose is to improve trust between a law enforcement agency and the community it serves," said Wray. Currently, the COPS's program is in various phases of review with 14 other police departments across the country. Just recently, the office released 94 findings and 272 recommendations to the San Francisco police department after finding discriminatory policing practices against people of color.

The process can take up to two years, and the findings will be released in a public report. Experts in the field of policing will be interviewing police officers and concerned citizens alike during the review. They will also host "listening sessions" which will serve as community forums for citizens to come and voice their input.

According to Strickland, conversations about inviting the COPS program to Memphis started in April, but an objective review of the MPD had been a priority of his since his first day in office. Rallings echoed the mayor's desire for a transparent process to improve community policing, simply saying, "This is the right thing to do."

Public scrutiny of Memphis' police department has been amplified in the last year, following the death of Darrius Stewart, an unarmed black teenager who was shot and killed in a confrontation with former police officer Connor Schilling. Stewart's death occurred in a time where nation-wide public concern about police relations with minority communities is at an unprecedented high.

Memphis citizen's discontent with their own police department took physical form in early July of this year, when more than 1,000 protestors shut down on the Interstate 40 bridge into Arkansas traffic for several hours. Rallings said that the bridge protest did not spur the department's decision to enter into the assessment, as the talks with the DOJ had already been underway.

Rallings acknowledges that a detailed investigation of this size and scope will likely yield some uncomfortable findings, but regardless the department is ready and willing to comply.

"We want to improve," said Rallings, "And in order to improve...you have to open yourself up."

The first listening session will be on Nov. 29 from 6:00p.m. to 9:00p.m. at Mississippi Boulevard Christian Church in Midtown, Memphis.