Citzens Gathered to Protest the Dakota Access Pipeline Denied Access to the Offices of the U.S. Army Corps of Engineers 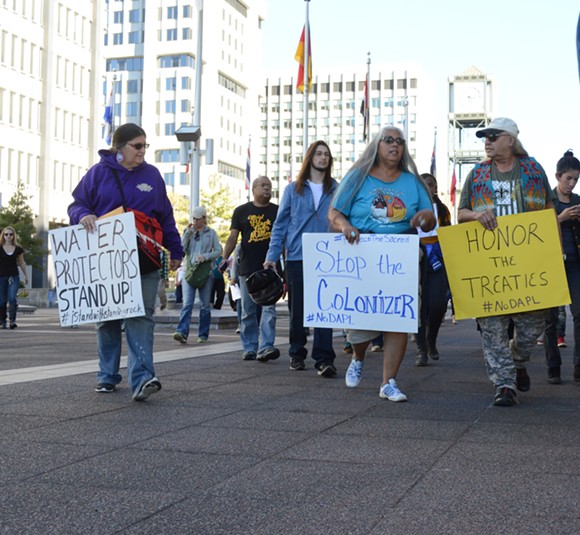 This afternoon, security guards at the Clifford Davis Odell Horton Federal Building in Downtown Memphis blocked citizens of Memphis and press protesting the Dakota Access Pipeline from entering the building to file their grievances with the Memphis offices of the U.S. Army Corps of Engineers.

The crowd of roughly 50 people gathered to voice their concerns about the controversial oil pipeline that protestors say threatens sacred burial grounds and sovereign land that was granted by the U.S. government in 1868 under article 11 of the 1868 Fort Laramie Treaty.

Security did let other camera crews into the building, but explained that they were there for "something else".

"You're getting a small taste of what we've been dealing with for hundreds of years," explained Caroline Mudbone, a transplant Memphian from California who was there to inform the crowd of the conditions protestors face in the ongoing Standing Rock protests, which have been ongoing for weeks now.

"Our youth are getting shot by rubber bullets, they are spraying us with tear gas, and this is all because we are protecting a water source for millions of Americans," said Mudbone.

Media coverage of the Standing Rock protest has been almost non-existent explained Mudbone. Speaking to the crowd she explained, "We have seen a widespread media blackout, no one is there to say what is happening."

Satellite oppositions of the Dakota Access Pipeline have surfaced all over the United States, but today was the first organized protest in Memphis, attended by familiar local environmentalists such as Scott Banbury and dozens more citizens.

Organizer Thomas Wayne Walker was told that the offices of the U.S. Army Corps of Engineers was closed today.

"It's not a national holiday, and its Thursday in the middle of the afternoon — so, I'm not sure what's going on."