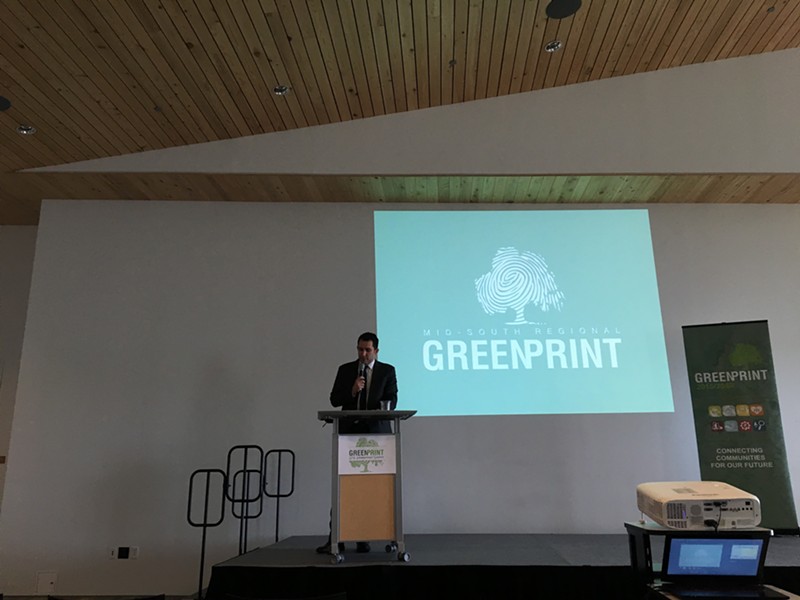 That was the theme of the Memphis-Shelby County Office of Sustainability's third bi-annual Greenprint Summit. Centered around the Mid-South Greenprint plan, the summit hosted national speakers and local organizers who championed investments and federal grants being used to enhance longterm sustainability and create climate and disaster resilience across the region.

Following three year’s worth of work from 82 organizations from Shelby, Crittenden, DeSoto, and Fayette counties, the plan aspires to create 500 miles of greenway trails and 200 miles of bike paths by 2040. Over a 25 year implementation, organizers hope the Greenprint will reduce overall housing and transportation costs per household, attract residents and visitors, reduce flooding and pollution and create cleaner water and air, and reduce poverty for disadvantaged neighborhoods by increasings goods and services in those areas.

The U.S. Department of Housing and Urban Development kickstarted that work in 2011 when it awarded a $2.6 million grant to Shelby County to develop a long-term vision for the area's green spaces, including parks, greenways, community gardens, storm water management, waterways, and more. This year, HUD handed an additional $60 million to Shelby County to combat future disasters brought forth by flooding and climate change.

Charles Flink, a senior advisor with Alta Planning and Design, emphasized the importance of placemaking — creating special environments from a community's assets — and the longterm economical impact from the Greenprint plan. A prosperous greenway would attract new businesses as well as bolster residential spending, Flink said.

"For every dollar invested in a Greenway, you get $3 in economic return," Flink said. "And that's being conservative."

Flink said the Greenway initiative was a catalytic project that would influence economic interests for years to come. About 25 percent of the project's construction dollars has been directed to minority business, according to Flink. And by design, Greenways would increase activity, reduce obesity, and reimagine the way people travel.

"It can be part of the way people move throughout Memphis on a daily basis," Flink said. "Greenways are more than a trail through the woods."

Greenways, as they are completed, will likely be maintained by their cities and local non-profits, said John Michels, a Greenprint coordinator. A parks advocacy organization, a separate initiative led by Innovate Memphis with help from Hyde Family Foundations and the City of Memphis Division of Parks and Neighborhoods, will assist local neighborhood advocacy groups by providing them with resources and contacts to the city parks division. Both efforts, Michels said, will address recommendations to the Greenprint plan.

To conceptualize a parks advocacy organization, Innovate Memphis created a pilot advocacy program that ran for 10 weeks and focused on Kennedy, Chandler, and Gooch park. Megan Higgins, a project manager with Innovate Memphis, said the program reshaped their business plan.

"The pilot was really about testing neighborhood's ambition for civic engagement," Higgins said. "Our pilot was more about helping [people] organize more than planning and executing. Residents do not recognize themselves as park advocates, but that's exactly what they are."

Also associated with the Greenway Project is the city's Fourth Bluff Project, an effort to revitalize four blocks of downtown property that include the longstanding Cossit Library, Memphis Park, and Mississippi Park, and the promenade. Made possible by a $5 million revitalization grant, Higgins said the days of "one size fits all" parks should be left in the past.

"Neighborhoods should have the freedom to abandon the default positions of two basketball courts, a set of swings, a jungle gym, and an attached slide," Higgins said. Higgins cited Spain's Gulliver park as a 21st century example.

The $60 million grant awarded to Shelby County by HUD's National Disaster Resilience Competition will go toward creating double-duty solutions, said Jason Hellendrung, a representative with Sasaki Architecture. As climate change continues to pose a threat to communities, Hellendrung said cities have to design for resilience while also creating plans that can be phased and integrated over time with future projects.

The grant will focus on three initial areas: Big Creek, where wetlands will be reestablished, flood storage will be created to accommodate water flow, and multi-purpose trails and green space will be produced for food production. Wolf River, where better protection for downstream homes will be built, new amenities to Rodney Barber Park and Kennedy Park will be added, and a green street and bike lanes near Highland Street will be formed. Lastly, South Cypress Creek, where existing homes will be bought out and replaced with green space, wetlands, and flood storage, as well as the development of nearby vacant lots.

"What made Shelby County eligible was unmet need," Hellendrung said.

An online interactive map has also been launched that showcases all aspects of the projected Greenprint plan. Users can see how many miles are complete and how many have been funded.