Planet Fitness will soon begin construction on its $3.8 million new building on the site of the Old Imperial Lanes on Summer, according to a permit filed Monday.

A company called “PF Arkansas” filed the permit with the city but did not say how big the new gym would be.

The company made its intention to tear down the building and build something new on the site late last year. The permit makes this clear as it states ”new building” instead of "renovate."

The lanes opened in the 1950s, according to Memphis magazine columnist Vance Laduerdale, but closed in the mid-2000s.

Here’s what Vance said about Imperial Lanes in this installment of his regular Memphis history feature "Lost Memphis:" 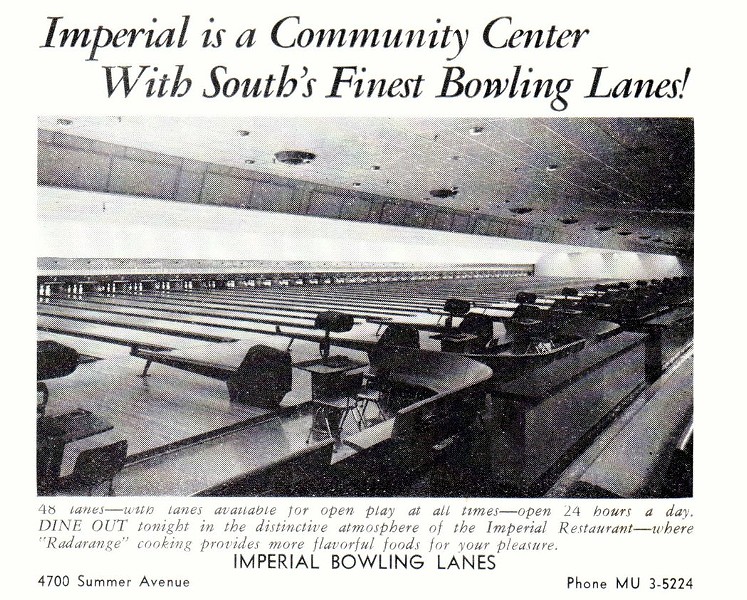 “When it opened in the 1950s, Imperial Lanes — as its name suggests — was the finest bowling alley in Memphis, and one of the nicest in the South. As this ad from a 1959 issue of the Memphis Hotel and Motel Guide shows, it was spacious and clean and bright and ultra-modern in every respect. It was huge, with 48 alleys, and so popular that it remained open 24 hours a day.

Where other bowling alleys usually had a basic snack bar, Imperial had a nice sit-down restaurant, and in 1959 your meals were prepared using the latest “Radarange” cooking, which “provides more flavorful foods for your pleasure.” In other words, they had a microwave. I think.

The Imperial has been closed for a decade now. The biggest crowd it’s seen in years was in 2011 or thereabouts, when the Memphis Flyer held one of its popular “Best of Memphis” parties there, and on weekends the parking lot is filled with flea market vendors. But much of the interior has been gutted, so I doubt we’ll ever see Imperial return to life as a bowling alley. I hope they can keep it in some form, however. It’s a nice building, inside and out.”