February 02, 2017
35 comments
Though unconfirmed, it's estimated that roughly 3,000 people from Memphis and surrounding areas gathered at Clayborn Temple to march in protest of President Donald Trump's executive order that bans travel from seven majority-Muslim countries.

This marks the third time in less than a year where mass protests have marched through Memphis streets, and the second mass protest since President Trump's inauguration. Two organizers — Veronica Marquez and Christina Condori  with Comunidades Unidas en Una Voz (CUUV) — organized the march within days of the executive order.

By aligning efforts with other activist groups in Memphis such as the Official Black Lives Matter Memphis Chapter and Memphis Voices for Palestine, word of the march spread to thousands within 24 hours of being announced. 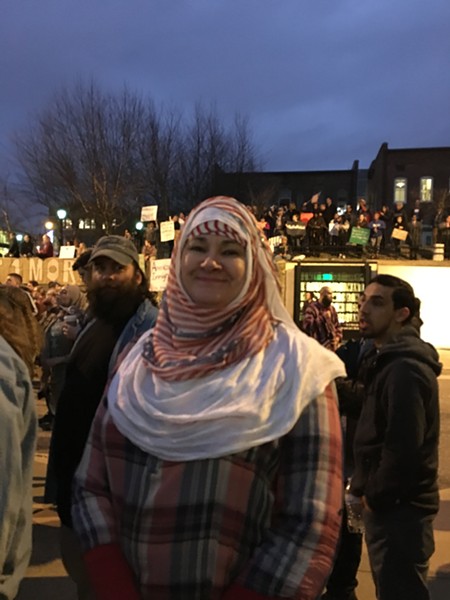 The half-mile march started from Clayborn Temple and traveled along Pontotoc and Mulberry, ending at the National Civil Rights Museum.

Before a selection of speakers from different ethnic backgrounds began, dozens of Muslims knelt for evening prayers, surrounded by thousands of who either claimed a different religion or none at all.

For many in the crowd, there was a tangible difference in police presence when compared to the Women's March held two weeks ago, where the crowd count soared to roughly 9,000.

Ian Nunely, who attended both events, felt the presence of Blue Crush vans and police helicopters circling overhead at the pro-immigration march was meant to send a message.

"The amassing of Blue CRUSH vehicles directly behind the demonstrators at the museum seemed intentional, as if they were constantly peering over the shoulders of the crowd," said Nunely. "There was nothing like that feeling at the Women's March."