Murder Rate Holds But Violent Crime Up in City, County

The violent crime rate — which includes murders, rapes, robberies, and aggravated assaults — rose 4.4 percent in the city and 4.2 across the county, according to the Commission. 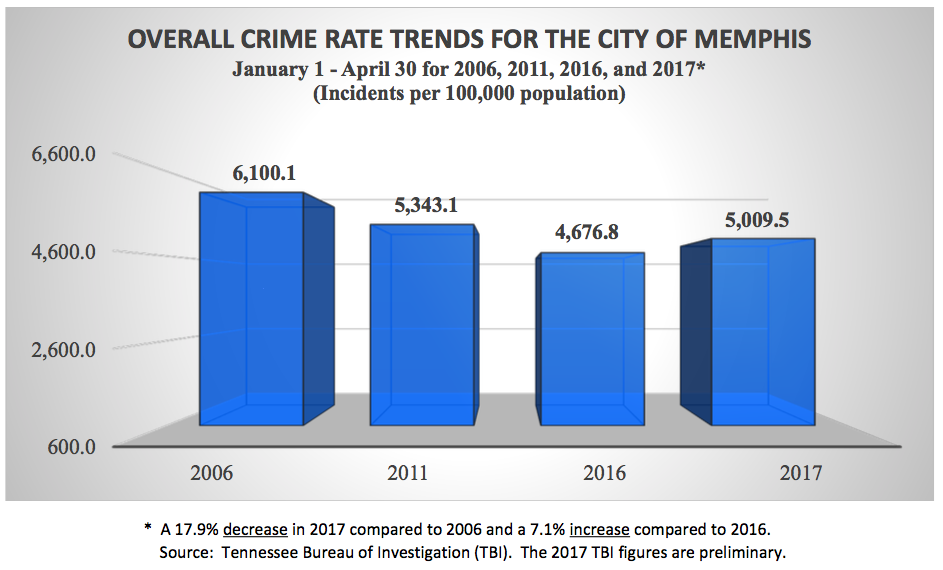 “Any way you look at them, these latest numbers are not acceptable,” said Bill Gibbons, president and CEO of the Crime Commission.

However, Gibbons said that city officials are working to get more Memphis Police Department (MPD) officers on the street and “a number of steps to tackle gun and gang violence are in the works.” Also, he said that the community prosecution model now being used by the Shelby County District Attorney General’s office “looks promising.”

That model assigns prosecutors to certain areas of the city so they’ll understand the people there and the issues facing them. Prosecutors are now embedded at MPD’s Old Allen and Tillman precincts. Shelby County District Attorney General Amy Weirich said “serious crime” has dropped at those two station for a number of reporting periods.

“Hopefully that trend will continue as we all move forward and work together to make Memphis a better and safer place to live,” Weirch said.

Another embedded prosecutor will soon be added at the Ridgeway station.

That prosecution program is a part of the new Operation: Safe Community plan. That plan was launched in 2006 and was updated last year. It seeks to unite community organizations across the county to reduce crime. Gibbons said in a statement Thursday that “we must have a health sense of urgency to move the plan forward.”

• The property crime rate, which includes burglaries, motor vehicle thefts, and other felony thefts, was up 12.9 percent in Memphis and 11.2 percent in Shelby County for the first four months.

• More than 1,400 motor vehicle thefts were reported from January through April.

• The overall crime rate here has dropped over the last 10 years.

• Though, it rose 7.1 percent in Memphis and 5 percent in the county in the first four months of the year.