Three Shelby County site have been added to the National Register of Historic Places.

Rock of Ages Christian Methodist Episcopal Church in Memphis, the Charles Davis House in Collierville, and the Memphis Federation of Musicians Local 71 Building in Cooper-Young have all been added to the list, according to the Tennessee Historical Commission.

Here's how the commission described the three sites:

The stripped classicism of the company’s design reflects both a traditional design with post-WWII modern influences. McKissack and McKissack’s design of the two-story brick building is seen in the columned entry, symmetrical design, and brick pilasters.

More important than the design of the building is the role it played in the early 1960s Civil Rights movement in Memphis. Although not as well-known as the 1968 sanitation worker’s strike, in 1960, 200 city sanitation workers met at the church to begin organizing for equal representation with the Teamsters Union. As the union organization movement grew, larger venues were needed. While the 1960 effort was not successful, it is considered a strategic moment in the city’s Civil Rights movement. 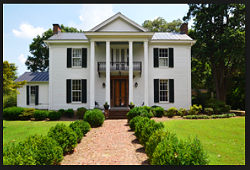 Located in Collierville, the Charles Davis House was built in 1841 and in 1855, Andrew Taylor purchased and remodeled the house as a gift to his daughter Laura Therese and her new husband Charles Davis.

The two-story frame residence is a good example of a Greek Revival influenced I-house. Covered in shiplap, the most prominent feature of the house is the pedimented entry with square paneled columns and double-leaf doors, on both stories, that are flanked by glass and wood sidelights. Multi-light windows with shutters and pilasters on the exterior and paneled woodwork with shouldered architrave trim inside are important Greek Revival features of the house.

The house stayed in the Davis and Taylor families until 1945 when the Porter family purchased the house and updated the interior. There are few changes to the historic architecture of the house.

Designed by Memphis Federation of Musicians member and local architect William Gaskill in 1961, the building is a modest example of the International Commercial style.

Located at the edge of a residential area in Memphis, the stark concrete and brick veneer and unadorned aluminum windows are the features that define the style.

More important than the style is the role the building had with the Memphis Sound, popularized by the city’s Stax Recording Studio. The sound was a Southern version of soul music popular in the 1960s that included horns, organs, bass, and drums.

Until the British Invasion of The Beatles and other groups, the Memphis Sound was at the height of popularity in pop music. As music tastes began to change and use and importance of Local 71 declined, as did its membership. Today the Memphis Symphony Orchestra makes up most of the local’s membership.

The three Shelby County sites were among eight sites across the state to be listed on the National Register.