Two big votes came down last night at the Memphis City Council meeting, one reduces the cover charge on the Beale Street Bucks program and the other paves the way for the future of Railgarten.

The Memphis City Council allowed Railgarten to keep its special use permit, which the council had given the entertainment complex in February, with the condition that its owners get 100 more parking spaces.

Railgarten partners had had those spaces (and more) in hand by the time they walked into Memphis City Hall Tuesday. See our Q&A with Railgarten co-owner, Martha Hample, here. Owners had previously explained their position last month.

(Also, their food is great, according to a Flyer story here.)

With that permit back in hand, Railgarten now faces a vote before the Board of Adjustment Wednesday. If its owners win there, they may be able to re-open the spot’s big backyard area.

“The council today held an evidentiary hearing to consider the revocation of the special use permit for Railgarten, based on concerns with compliance with the zoning code and process as well as the necessary provision of parking for customers, after complaints from several neighbors.

After review, the council voted to uphold its original (special use permit) with some additional conditions, primary of which is to require at least 100 parking spaces for the venue, which have already been secured by Railgarten. The council welcomes this exciting new development and venue in the Midtown Entertainment District. 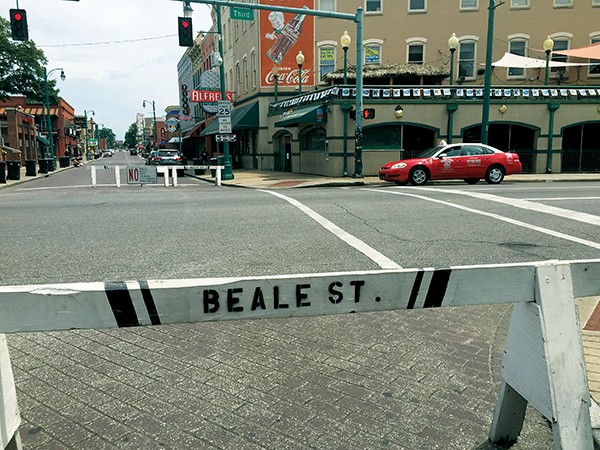 But in a nutshell, the program was begun to thin large crowds that would hit Beale Street during summer Saturday nights. It worked, but some council members felt the cover charge targeted African Americans.

The weeks-long debate on the program reached an intense pitch during a committee meeting Wednesday that threatened at times to go off the rails.

Council member Joe Brown said the stampedes on the street, which initiated the Beale Bucks program in the first place, were staged, part of a grand conspiracy to keep theBucks program afloat. Though, he could not serve up evidence to prove that.

After a closed-door meeting with council attorney Allan Wade, council members reviewed the matter in the open council meeting. The vote was slated to be for a resolution to do away with the program, one that Mayor Jim Strickland and Memphis Police Department director Michael Rallings lobbied against.

But council members took a middle way. Instead of getting rid of the program, they lowered the Beale Street Bucks fee from $10 to $5. They also decided to form a task force to fully investigate the program.

Here’s how council chairman Berlin Boyd described the action in his post-meeting wrap-up:

“Due to growing concerns around the appropriateness of the Beale Street Bucks program, the accounting of funds for the program, and the fact that these funds may be used to subsidize responsibilities that should be borne by the Beale Street Merchants Association rather than visitors to our beloved Beale Street, the council decided to create a new task force to examine the program in full detail through September, drilling down into policies and procedures to ensure visitors’ interests and rights are protected.

In the intervening time, the council has also moved to reduce the current Beale Street Bucks fee from $10 to $5. The council is committed to moving forward now to find the best balance of legality, safety, and effectiveness for all citizens and tourists who want to spend time on this great public asset.

“Please reminder your viewers and readers over the next few days, Beale Street Bucks received plenty of attention yesterday, but please understand that the change will not take effect immediately.

The resolution to reduce the entry fee from $10 to $5 won’t be finalized until the minutes of yesterday’s meeting are approved in June. So if you’re going to Beale Street Saturday night, you should expect to pay $10 for Beale Street Bucks.”