Close to 250 people from across the city filed into the cafetorium of Bruce Elementary School on Tuesday night to show their support for the removal of Confederate statues in Memphis.

A large portion of the night was dedicated to allowing individuals to voice their opinion on why they feel the Nathan Bedford Forrest statue in Health Sciences Park and the Jefferson Davis statue at Memphis Park should be removed.

A couple dozen people, one after one, stood in front of the crowd and stated their piece, saying things like "the monuments don't teach, they humiliate" or the statues are "unfair and symbolize oppression."

One man, speaking directly to non-present government officials said: "If you don't take them down, we will." 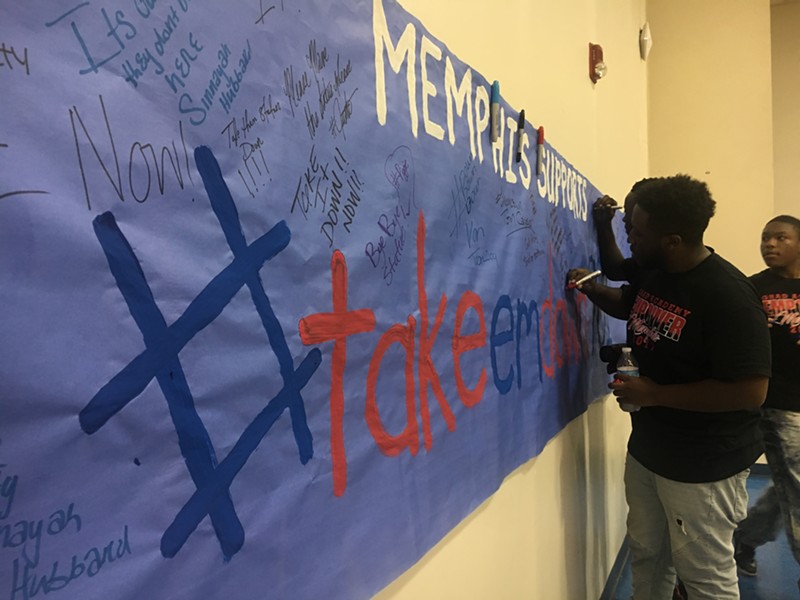 Leader of Memphians for the Removal of Confederate Statues and organizer of the meeting Tami Sawyer says the comments were collected for public record and will be sent to the Tennessee Historical Commission, as well as local and state officials.

He asked that the Commission allow the City of Memphis to "act upon its own values in determining which historical figures to honor in public spaces."

However, some, like members of the Sons of Confederate Veterans (SCV) in Memphis believe that the statues are important historical monuments that should remain as a "tribute to honored city residents of our nation's past."

Lee Millar, the spokesperson of the group says that those who tear down historic monuments "are no better than Nazis or ISIS," as he says they are "historical terrorists."

He says the SCV will oppose any removal of the statues "vehemently" and will take legal action if necessary.

But Sawyer says the city is not creating equity if the statues remain prominent.

Moving forward, she says the next steps for her group will be forming committees to take on different strategies for the statues' removal such as the legal options, policy and lobbying, community engagement, and art installations in response to the statues.

"I truly believe that these statues coming down could be the push that the movement for equality in Memphis needs," Sawyer said.