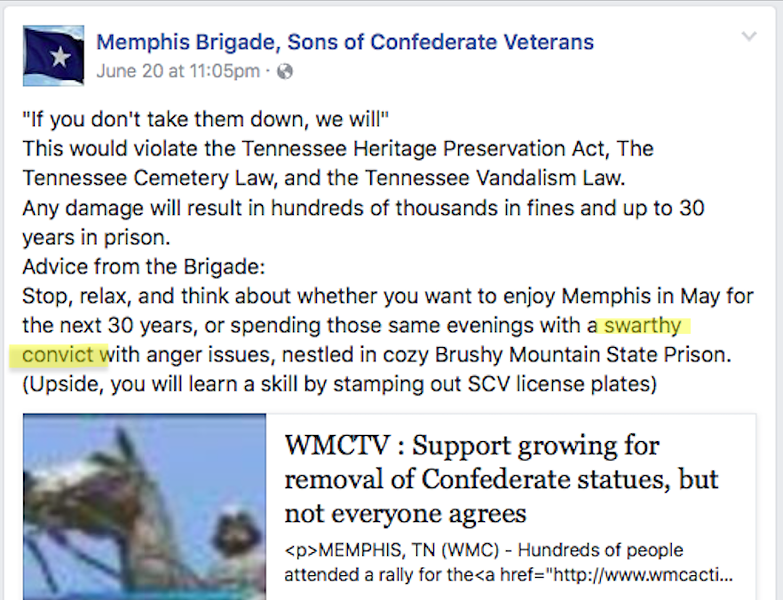 Those who want to take down Confederate monuments in Memphis are “losers,” according to the Memphis Brigade of the Sons of Confederate Veterans (MBCSV), and if they illegally take down any statues they can spend years in prison with a “swarthy convict.”

These revelations come from a stroll through the MBCSV Facebook page. The identity of the group’s Facebook poster isn’t known. It is not clear whether or not the poster speaks for the entire group or for themselves only. If the poster speaks for the group, the page becomes a source of insight into and official statement from perhaps the largest group to oppose the statues' removal.

But the page posts often about defending Confederate statues and monuments, also defending and clarifying the significance of the Confederate flag, and occasionally taking swipes at “yankee” newspaper columnists and New Orleans Mayor Mitch Landrieu.

On a local level, the MBCSV Facebook page often posits that the city does not have enough police officers, a source of the city’s high crime rate, it claims. The page uses the assertion to sideswipe arguments for removing statues of Nathan Bedford Forrest and Jefferson Davis from Memphis parks, with the idea that city leaders have more to worry about.

On a post about the city’s upcoming Independence Day Fireworks Spectacular happening Downtown, the MBCSV poster wrote, “I hear General Forrest and Jeff Davis are going to stay on their pedestals, so they won't shoot/rob/stab/abduct you. But all other bets are off. If you go down there be careful.”

The MBCSV Facebook page also used the too-few-police line to call those who want the Confederate statues removed “losers.”

“A group of losers met at a school to talk about taking down statues last night, while two blocks away a guard was carjacked at a hospital,” the poster wrote on June 21, the day after the meeting at Bruce Elementary of those interested in working to remove the statues. “Our Thin Blue Line gets thinner, and the city cut their budget $1.73 million.”

Posting at 11:05 p.m. the night of that meeting, the MBCSV promised 30 years of jail time for anyone illegally removing the statues, jail time that would come with a dark-skinned cell mate, according to the group. 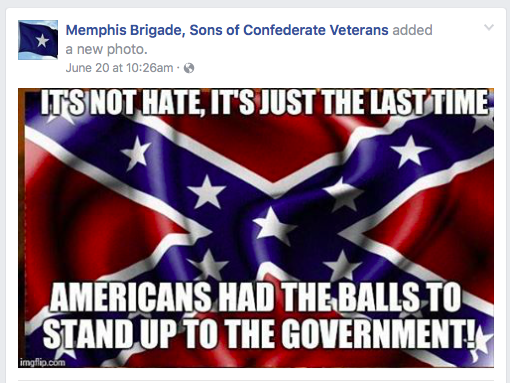 “Advice from the Brigade:

Stop, relax, and think about whether you want to enjoy Memphis in May for the next 30 years, or spending those same evenings with a swarthy convict with anger issues, nestled in cozy Brushy Mountain State Prison. (Upside, you will learn a skill by stamping out SCV license plates.)”

Swarthy means “of a dark color, complexion, or cast,” according to Merriam-Webster. Google says “swarthy” means “dark-skinned.”
Stop, relax, and think about whether you want to enjoy Memphis in May for the next 30 years, or spending those same evenings with a swarthy convict with anger issues, nestled in cozy Brushy Mountain State Prison. — Memphis Brigade, Sons of Confederate Veterans tweet this
Lee Millar is often quoted in the media as the spokesman for the local Sons of the Confederate Veterans group in Memphis. But there are many affiliated groups in Memphis. Millar he is a member of the General Nathan Bedford Forrest Camp 215.

Millar does not shy away from tough talk, much like the poster for the MBCSV group. In a statement about the recent meeting to remove the statues, Millar said those who want to tear down historic monuments “are no better than Nazis or ISIS. They are historical terrorists” and said the “TearDownMemphis” or the “TakeEmDown” groups bear “the same characteristics.”

“ I will NOT be attending the Bruce meeting today so as to not legitimize that mob gathering,” Millar wrote at the time.

Here's a brief look at some of the images and posts from the MBCSV Facebook page. Also included are several comments to the group's posts that were never deleted. 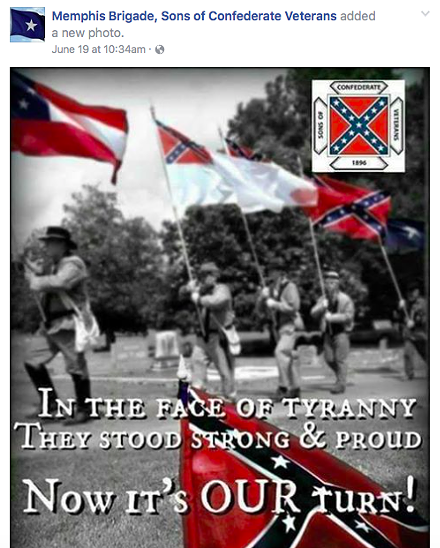 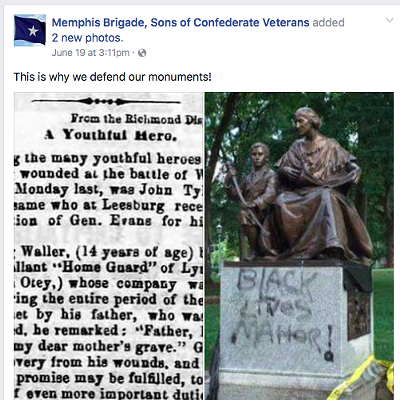 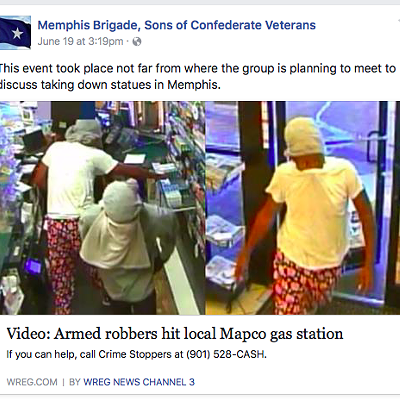 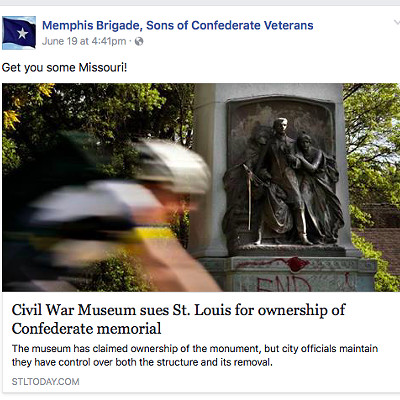 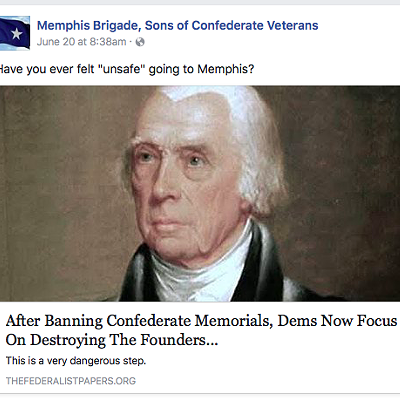 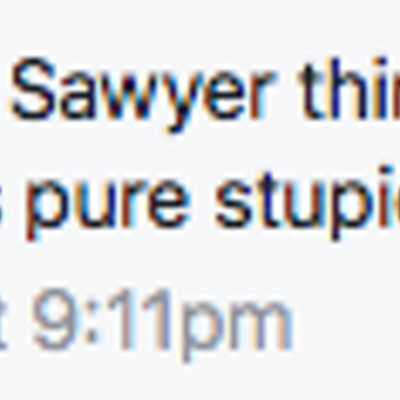 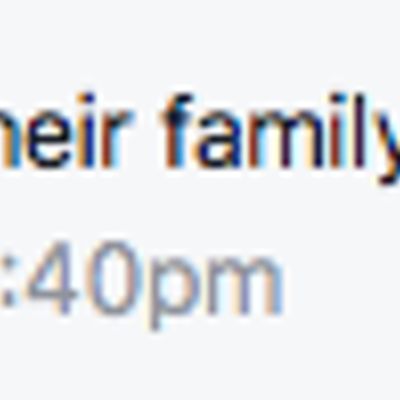 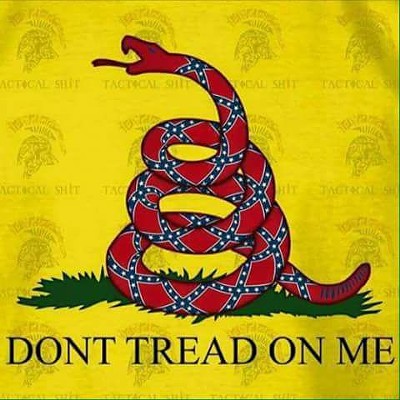 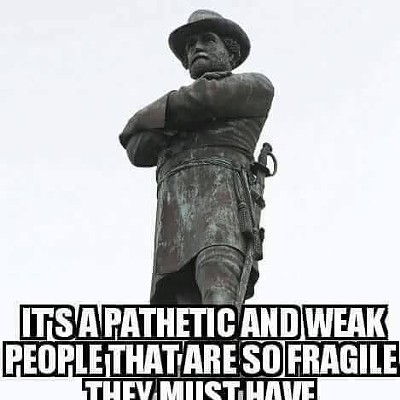 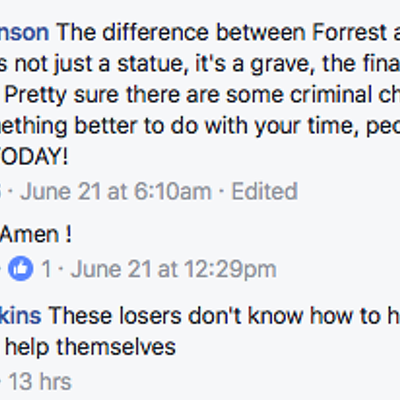